Back in August, Wednesday August the 8th, at 12:50pm to be precise

, the third biggest story in the world for UK tellytaxpayers, according to BBC Views Online, was Channel 4 accused of ‘distortion’. 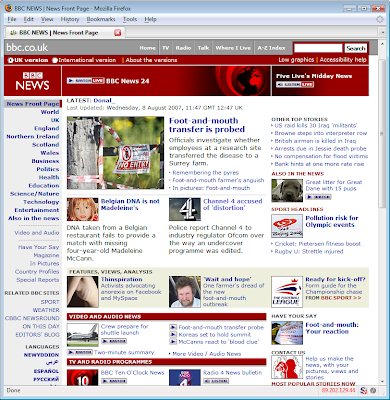 The third most important story in the world on 08AUG2007?

The story first appeared, according to Newssniffer, at 10.50am, with the headline No charges over mosque programme, becoming Channel 4 accused of ‘distortion and C4 ‘distorted’ mosque programme as it went through the BBC Views Online spin cycle, making it to the third most important story position at lunchtime, remaining on the Views Online front page in one form or another until after 7am the next morning.

What is strange is the enthusiasm and high priority BBC Views Online gave this story – they didn’t, for instance, report on the high-profile Undercover Mosque programme at all when it was first broadcast – too busy, not enough space, not important enough: all the usual BBC flannel for avoiding covering news that Beeboids don’t want to report.

And yet, when a politically correct bunch of West Midlands plods, abetted by the Can’t Prosecute Service, stick their oar in, without, it should be noted, any complaints from the public, BBC Views Online rushed to tell the world all about it with great fanfare and import, complete with lengthy quotes of shock, innocence and hurt feelings from those who were condemned out of their own mouths on the undercover film.

In the meantime, Private Eye (see Biased BBC here) and BBC Newsnight have amply demonstrated just what a crock of the proverbial the criticism of Undercover Mosque was.

Yesterday, BBC Views Online did a reasonable job of reporting Mosque programme claims rejected, but here’s another strange thing, this news wasn’t important enough to merit the BBC Views Online front page treatment. No, it was reported for a while on the Entertainment page, way down at the bottom, in the More from Entertainment, TV and Radio section – not exactly setting the record straight after Views Online’s silence of January and the front page fanfare of August!

Given BBC Views Online’s slanted coverage of the Undercover Mosque story from the beginning I suspect that WMP aren’t alone in giving “legitimacy to people preaching a message of hate to British citizens”.

P.S.: An anonymous wag drew attention yesterday to what one Beeboid, a certain ‘John Reith’, said back in August:

Given the ringing endorsement ‘Undercover Mosques’ received on this blog and how many contributors chided the BBC for not having made the programme themselves, I’d be interested to know what you’ve got to say now that it has emerged that parts of the film are said by the authorities to be about as reliable as an RDF showreel.

Presumably this isn’t one of those cases then where those “involved in the real business of broadcast journalism (making TV and radio) get a bit narked“ about being judged on the basis of “small but significant shortcomings of the News Website“ then!

Addendum: David Henshaw, executive producer of Undercover Mosque asks Why did police want to censor me?:

Context? No one from the West Midlands Police, the CPS or Green Lane Mosque has yet given us the correct context for the notion that women are born deficient, that homosexuals should be thrown off a mountain or that young girls who refuse to wear the hijab should be hit.

So what was the police’s intervention about? Why did the police and the CPS feel entitled to act as television critics and, in effect, as potential censors of what we could watch? Clues to the motive, I think, lie in the slightly sinister phrase “community cohesion”.

Anil Patani, the Assistant Chief Constable who reported the programme to Ofcom, is in charge of “cohesion” in the West Midlands force. He said he was worried that those featured in the programme “had been misrepresented”.

His chief was worried that our alleged “distorted editing” would create an unfair perception of sections of the Muslim community in the West Midlands. Feelings of public reassurance and safety would be undermined. (The feelings of gays and women, apparently, were not so high on the agenda.)

Thank you to Biased BBC reader Lurker in a Burqua for the link.

22 Responses to Back in August, Wednesday August the 8th, at 12:50pm to be precise