Reading Jay Hunt, the Controller of BBC1, describe Jonathan Ross as “responsible” made me think that the BBC hierarchy are like the Bourbons in that they learn nothing and forget nothing. How on earth can anyone describe the sniggering puerile cash grabbing Wossy as “responsible” when he has shown no evidence that he even understands the concept?

Michael Crick and Newsnight did a smear job on Friday on the Government’s abuse of power in arresting Damian Green, in a programme flagged up by John Reith spins in his grave in the comments.

Crick begins his report (20 mins into the BBC broadcast ) by talking of the “mystery” of Damian Green’s leaks, and how this may run and run. Of course, the question (not mystery, as motives are not lacking) of why he was arrested and held for questioning for 9 hours at all is one which needs to be fully and swiftly explained, but this angle the BBC ignores. They wish to imply that the Government’s actions are above suspicion.

At the beginning of the item we are treated to a sinister close up of Green’s eyes- the suggestion being that there must be some sinister underlying issue. We were given a short clip of David Cameron’s response to the arrest, and a short clip of Clegg doing the civil liberties bit, and then we were fully into the Nu-Lab love in. Jacqui Smith worded herself carefully in claiming that the arrest was not authorised by ministers (how about “suggested”, with “suggested” guarantees, Jacqui?). The fact is that the Government is answerable for the actions of the police, and in this case more so than usually, but this angle too was lost. Martin Salter (Lab) backed up the action, making great play of the wording of the accusations against Green of not just receiving but “actively conspiring” to get the leak. This follows Crick’s own use of the word “procuring”. But what does this mean? These locutions are simply smears- leaking is active, and information must be gained. Does it mean the information was paid for? Are they talking of bribery (bribing a public official)? If so, they had better say so. The BBC not only lets a Labour politician smear Green, it participates in advancing that smear.

Then Crick segued into a historical perspective. It seems promising when a young Gordon Brown is shown in archived footage defending his own mole in the then-Conservative Government. Crick though immediately cuts to another Nu-Labour figure, Geoffrey Robinson. Robinson refers to Winston Churchill getting (or procuring?) leaks from Chamberlain’s hapless administration! Genius. Brown and Winston in the same breath- it’s a running BBC joke played on the public.

All the time that they build this picture of noble leaking- to Brown and Churchill- however, they are carefully implying that there is more to it in the case of Green. Crick’s final comment seals it:
“last night it looked like it [the Green arrest] could badly embarrass the Government, but tonight it is less clear, with some Labour sources saying the Home Office leaks didn’t just go to Damian Green, but to other Tories too”

How does it alter the situation that colleagues of Green were involved? In fact it would make it even more likely that the leaks were conventional if they were shared among Green’s colleagues (I don’t know what an unconventional leak might be, actually, but I am sure the BBC/Nu-Lab can come up with something). To the viewer however it suggests conspiracy, and dark forces at work (maybe the vast right wing conspiracy?) in the Green “mystery”. There’s something they’re not telling us, the BBC imply, warming to their theme. But surely it is for the Government (not the Conservatives, or Green) to answer for its arrest of a Member of Parliament? The BBC (and Crick) forgets its place, if it ever knew it.

It’s necessary to reiterate the real issue: Green was arrested over an apparent leak. This was a wholly exceptional response to a normal state of affairs in which many politicians have participated. The question is why this Government is so authoritarian, why it holds such antipathy towards its political opponents, and, for us, why the BBC is so wedded to the Government’s point of view. Smith, Salter, Robinson, and Crick himself are all Labour loyalists (Crick joined Labour aged 15 and intended for many years on a career as a Labour politician)- Crick wheeled out his comrades to peddle a Government perspective. The BBC is biased.

I note the BBC has been reporting the Great Leader declaring that it is important that “top earners” accept that they must pay more in income tax to “share the sacrifice.” As you know, the new top tax rate of 45% has been set to kick in at £150,000. As Private Eye points out, how fortunate then that those in Brown’s Politboro are only only raking in just over £141,000. You can be sure the BBC will never raise awkward little points like that with the Great Leader since we proles might get that idea that “sharing the sacrifice” does not extend to our political masters.

Caught the beginning of Any Questions this evening and had a chuckel at the make up of the panel. There was Geoff Hoon (Left), Caroline Lucas (Left), Vince Cable (New to the BBC I think, ahem, but also Left) and David Willets (Soft-centre). So hint of bias there, right? First up was a question on whether “extremism”as evidenced in events on Bombay could be defeated. Caroline Lucas immediately launched into an attack on American foreign policy and then got stuck into Israel’s “occupation” of Palestine as a probable cause of the Islamic terrorist scum attack in Bombay yesterday. Her rant was greeted by generous applause. Vince Cable also helpfully explained that “extremism” needed a political solution. Willets waffled about winning hearts and minds (Not the best advise when a deranged Muslim with an AK47 is hunting you down because you might have a British passport but still..) and amazingly only Hoon sounded even slightly gung ho, which is saying something! I look forward to the day when Any Questions will find the guts to allow an unapologetic spokesman for the war on Islamic terror onto its lousy show – but I’m sure it will never happen since a plurality of views is forbidden in easy consensus BBC land.

According to the BBC: “The Tories say they understand counter-terrorism officers were involved in searches of his home and offices.”

The “Tories” “say” they “understand”

According to the Guardian:

“nine counter-terrorism officers conducted simultaneous searches at four locations: Green’s constituency office and home in Ashford, Kent, his office in the House of Commons and his London home.”

Sounds pretty factual to me.

The same BBC that can give us accounts of mistreatment in Iraqi jails, can report endlessly on injustice in the US system cannot verify and report as fact the misuse of power in the nation’s capital. Why? Save Gordon.

(anyone curious why the Guardian should be a repository of fact on this topic should consider that the Guardian actually needs to be credible to retain paying customers, and has often made its way from being anti-establishment rather than just leftist.) 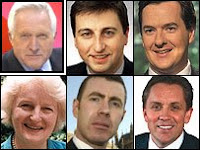 Well then the hour is approaching for our weekly interrogation of Question Time. Tune in and we’ll have a laugh. Live fisking and all the fun of the fair!Wonder how wee Georgie Osborne will perform?

Part of my problem with the BBC is not just outrage at the totalitarian license tax, it is the profound moral malaise that the corporation exudes, funded at my (and your) expense. I guess this sickening moral relativism is manifest in this evening’s news that eighty people are murdered in Bombay, many more injured and held hostage, and the best the BBC can do is call them “Islamic radicals”. No, they are evil TERRORISTS, they have TERRORISED innocent people and brought about their deaths this day in the most barbaric fashion possible and the fact that the bloody BBC cannot bring itself to utter the T-word in connection to this event is appalling. How long before we hear the mantra that these terrorists are really victims?

Who says the Today programme is dumbed down? We have chirpy “Communities Secretary” Hazel Blears and political author Michael Dobbs having a chat as to whether British comedy is anti-politics and whether we may need a British “West Wing”! British comedy, as seen on the BBC, is not anti-politics, it is institutionally anti-conservative. BBC programmes overflow with unfunny comedians with hard left sympathies so the idea that we may need a Brit West Wing to restore balance is surreal since the “West Wing” itself is more big leftist yawn.