Just a reminder that we go live again here on Biased BBC tomorrow night and this time I will have another moderator to help me so let’s make this the biggest and best liveblog yet. Here’s the panel for tomorrow night! 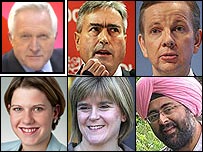