.. as John Allen Muhammed is executed, the BBC are puzzled by the motives of the perpetrator(s) of a shooting spree.

They weren’t always so baffled. I distinctly remember the ‘angry white male’ theory being aired on the Today programme.

I know it’s difficult to distinguish between a racist murderer (of their ten murder victims, eight were white, one black and one Asian) who happens to be a Muslim (admittedly a member of a Muslim sect that could be considered racist) :

John Allen Muhammad, 45, and his accomplice, Lee Boyd Malvo, 21, brought America’s capital to a standstill in 2002 as they picked off white targets at petrol stations and shops in the city’s prosperous suburbs. Malvo testified that Muhammad, driven by hatred of America because of its “slavery, hypocrisy and foreign policy” and his belief that “the white man is the devil”, planned to kill six whites a day for 30 days. 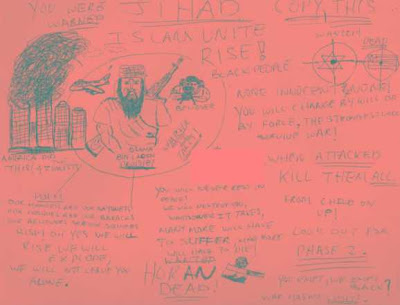 but you’d think the BBC might be able to give us the evidence and let us decide for ourselves.

38 Responses to Once More …