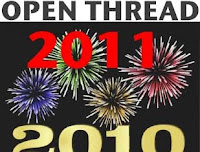 Out with the old, in with the new Open Thread.