THE FOGEL FAMILY -ERASED FROM THE BBC – REMEMBERED HERE 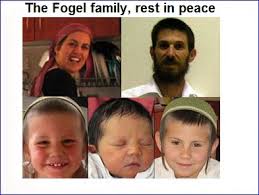 On Fridaynight, 11th March, a family of Jews werekilled in the West Bank.  Once more the world saw Jews being killed forbeing Jews.  Three of the victims werechildren, the youngest a baby of 3 months.
This photoof the victims has been readily available since the 12thMarch.   Nowhere has it appeared on BBCOnline.  It is normal that photos ofmurder victims do appear in reports on their murder.   It humanises the victims and helps us toshare in the horror of what they have suffered. For the BBC to deny the victims their humanity is to be complicit in theevil they suffered for being Jews.   Ifthere was one single proof of the anti-Semitic evil that lies at the heart oftoday’s BBC, this is it.
While theBBC continues to pave the way towards the second Holocaust, we will continue toprepare for the next Nuremburg.