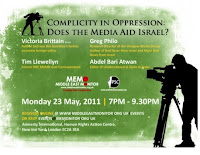 Remember that meeting hosted by Amnesty? The one entitled Complicity in Oppression, Does the Media Aid Israel?
I mentioned the speakers, ex BBC Tim Llewellyn and the BBC’s resident Israel-bashing buddy, bulgy-eyed Abdul Bari (call me Barry) Atwan, Greg Philo and Victoria Brittain. Here’s Richard Millett’s review of what sounds like quite a night.
They brought up such tired old clichés – as though the audience hadn’t heard them a million times before. “But Hamas was democratically elected” “All political parties are completely and utterly dominated by the you-know-what lobby” etc. etc.
“The BBC waits in fear of phone calls from the Israelis” – I recall that laughable quote from Peter Oborne’s ridiculous television programme about the Jewish lobby.

Poor old ”Barry” Atwan complains that he’s not on the BBC enough. They seem to have dropped him on one occasion in favour of the likes of PM Netanyahu and Ehud Barak. (Jewish Lobby again.) Tim Llewellyn has gone off his rocker. He feels sorry for poor Jeremy Bowen, who’s obviously so constrained by the Zionists at the BBC. He’s not completely mad though. One thing he said sounds rather sane. “………… the BBC didn’t properly address his complaints. He referred to one response from the BBC as a “tendentious piece of garbage”.
Haha.
The BBC is busy celebrating Amnesty’s 50th anniversary. BBC News 24 just interviewed one of its representatives, Dr. Champa Patel, most ingratiatingly. Apparently Dr. Patel works within the anti-racism and community development sector.
Physician, heal thyself.