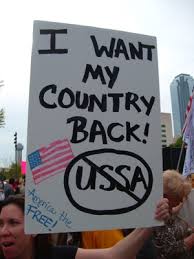 Those wicked Tea Party folks. Thank goodness for Mark Mardell’s exposure of their fiscal simple-mindedness here. You see they seem to believe that Government should not spend what it does not have and were THAT not bad enough they seem to hold the outrageous view that political representatives should stick to what they promise. Helpfully, urbane Mark is able to excoriate their wacky lunacy and when they claim that THEY are “the only adults in the room” he is on hand to point out that those viewing the US from abroad (Namely himself and other enlightened BBC liberal sophisticates) see them as children. Talk about throwing the toys out of the pram, eh Mark? Obama is running the USA to the edge to fiscal peril in order to secure electoral benefit during his election year. His calamitous stewardship of the economy is sanitised by the BBC and the idea is being projected that it is ALL the fault of the Tea Partiers.