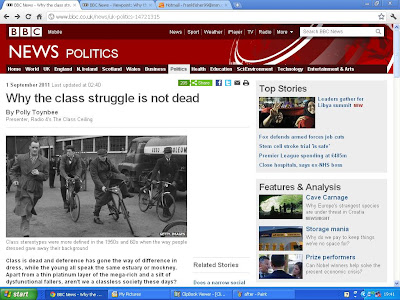 {Feedback Type:} I would like to… Make a complaint

{Summary:} You have published a Polly Toynbee opinion piece in your News section – it is not factual, it is opinion

{Complaint:} Separate news from opinion, make clear that the views expressed in the article are opinions, suggest that other views regarding ‘equality’ exist, for example cite the debunking fo the Spirit Level arguments in “The Spirit Level Delusion”.

I shouldn’t have to tell you this. Putting a byline on a piece doesn’t make it clear to people that it’s stepping outside your usual zone. It sits *within* your usual page and menu structure and appears for all the world to be a factual article, rather than the routine Pollyanna ravings of the country’s leading champagne socialist.

The piece was not clearly-enough labelled as a personal viewpoint. It has now been changed. We will also be running pieces in the near future from commentators from different parts of the political spectrum. 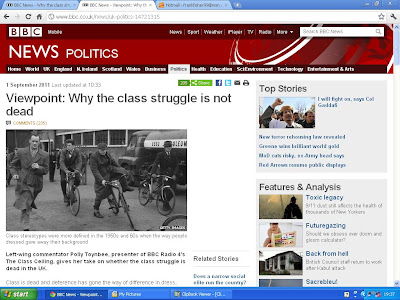 “We will also be running pieces in the near future from commentators from different parts of the political spectrum.”

Hmm. Notice “different”, not “all”. I guess that means Iain Dale and maybe Michael Gove for the far-right view, plus half a dozen Greens.

Listening to the trailers for their 9/11 coverage its like deja vu all over again – they’ve learned nothing and forgotten nothing. While I don’t think we’ll get quite so much “they had it coming” this time round, we’re already getting the “why didn’t Bush sit down and negotiate” splashed all over the news. Given that Bin Laden’s demands included the restoration of the Caliphate and the return of Al-Andalus i.e. Spain, Bush might have had a few problems doing a deal.

I can’t imagine what Michael “Private Peaceful” Morpurgo’s view (one of the 5 literary types writing their “9/11 letters“) of the War on Terror will be, can you?

The BBC’s a bit like one of those small sects that occasionally announce the end of the world or the imminent socialist revolution – you almost have to admire the dogged disconnection from reality which, for example, gave Ms Toynbee, former BBC social affairs correspondent and one of the chief architects of the decline in social mobility over the last 40 years, a R4 programme last week bemoaning the decline in social mobility. But we’re not forced to pay for the small sects.