Peas in a Pod 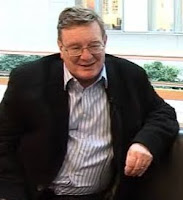 Isn’t Kevin Connolly like Mark Mardell? They’ve both got alliterative sounding names, their voices sound similarly sneery, and they even wear the same shirt.
Kevin has been busy in the West Bank recording the sounds of a weekly Friday demonstration by Palestinians against Israeli occupation.

“Israeli soldiers disperse the tiny crowd with a couple of volleys of stinging, choking tear gas!”

“It all feels a little jaded. A little like the international game of getting the Israelis and the Palestinians back to the negotiating table.”

He then hurries off to interview Mustafa Barghouti, the *moderate* Palestinian politician who is so moderate and non violent that he calls for Fatah and Hamas to be *unified*. He now wants the international community to be pro-active, just as they were in Libya, that’s how moderate and non violent he is.
Next Kevin scampers off to interview an Israeli settler, that symbol of everything we love to hate about Israel. The settler, complete with American accent and a notion that ‘the Jew’ has a special affinity with ‘the dog’, (H/T Biodegradable) and no doubt God himself, represents what Connolly undoubtedly sees as Israel’s misguided belief that they have a God-given right to *Palestinian land*. The settler duly hates Netanyahu.

Next, for balance, he trots off to find an Israeli author who hates the settler movement and Netanyahu.

What is the point, I wonder? We already know all this. We’ve already been told that settlers are extremists and loonies. We’ve already been told that settlements are the obstacle to peace. We’ve already been told that, if we’re being honest, none of us can stand Netanyahu. We already know that Israel is a major obstacle to world peace. We already know that Islam is the religion of peace.
We’ve been educated to accept all these things as a given.
But why?
Why don’t more people ask why Palestinian Arabs are entitled to demand the return of territory they lost in wars they themselves instigated? Why doesn’t anyone challenge the Palestinian leadership’s outrage at Israel’s legitimate and necessary precautions against terrorism whilst openly lauding terrorists and declaring that they’ll never accept a Jewish state? Why doesn’t anyone on the BBC acknowledge that charges against Israel of ethnic cleansing and apartheid are hypocritical and false when Abbas openly states that any Palestinian state will be Judenrein? Why doesn’t the BBC devote any air time whatsoever to enlightening us as to the legality or otherwise of Israel’s position regarding settlements? Why does Connolly meekly accept Barghouti’s outrageously hypocritical description of the Israeli government being full of settlers and extremists without asking him what the ‘Palestinian government’ is full of?

As Connolly very well knows, his report says nothing new. In his own words, it all feels a little jaded. And a lot biased.

15 Responses to Peas in a Pod