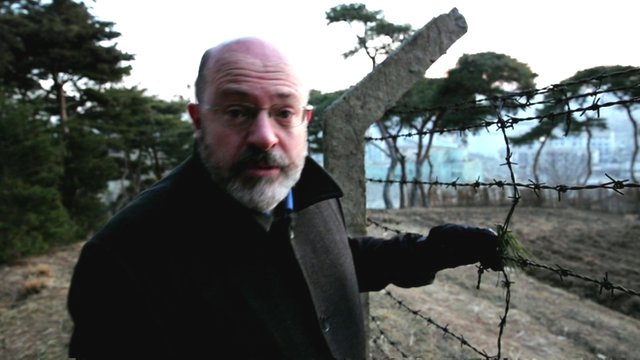 BBC News head of programmes Ceri Thomas said: “This is an important piece of public interest journalism.” Asked whether that justified putting student lives at risk, he replied: “We think it does.”

So what exactly was the public interest that merited the James Bond approach?

We are informed that North Korea has been indulging in a great deal of sabre rattling rhetoric of late.

The BBC, in the shape of John Sweeney, seeks to find out if North Korea intends to go to war or is that mere rhetoric,  just flag waving bravado from a new leader?

So what did we learn from the actual visit?

That North Korea has few, if any shops, no advertising, no freedom of religion and you can’t walk where you like….all summed up with a shocking illustration of North Korean barbarity…a barbed wire fence around a field.   But you can get a phone signal leaking over the border from South Korea.

When declaring North Korea was in fact a Neo Nazi state Sweeny gave as evidence the fact that a picture of Lenin and one of Marx had disappeared from a public square….but the camera kept out of view the massive hammer and sickle emblem on top of the building so prominent in previous shots.

And that war?  Erm…well…no politicians, no statesmen, no diplomats from North Korea wanted to be interviewed so Sweeney asked his young female tour guide what she thought….it’s all America’s fault…we might have a war, we might not.

To make up for the lack of enlightening footage from North Korea Sweeney interviewed Western experts on the area, defectors living in South Korea…and a Youtube clip of a North Korean gulag.

I believe I could have made the same report from the comfort of my home using the phone and the internet….and a trip oop North to the wastelands of Northern England laid bare by Thatcherite government policies.

An utter waste of half an hour of my time watching Panorama, a waste of BBC funds paying for Sweeney’s 8 day swannee and a stupid risk to take with the accompanying students who had everything to lose and nothing to gain.

They might have ended up with a few days of rigorous interrogation and a couple of months in a North Korean chokey..but Sweeney had nothing to lose….if he doesn’t get discovered he gets his film (such as it is)…if found out and thrown in jail for a couple of years say..the BBC wll still support him and pay his wages…and when he gets out he will have an even better story…and have lost a bit of weight…so all good for him.

I haven’t looked but I can imagine anyone of those students has a better tale to tell on Facebook than Sweeney has come up with.

Still, he’s the professional, he knows what he’s doing.