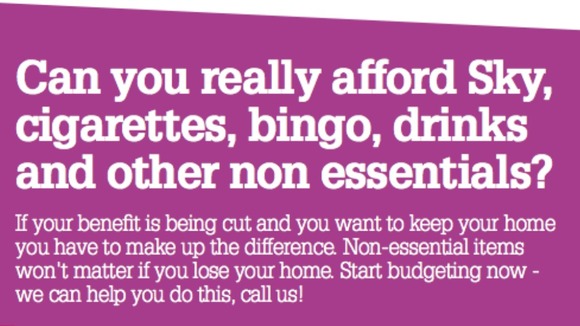 The ‘Spare Room Subsidy’ or as some of its critics call it, the ‘Bedroom Tax’…or as some are now calling it, the ‘Under Occupancy Penalty’.

Yes, a BBC presenter did say that yesterday…a new one from the BBC with impartiality in its DNA always wanting to give you every nuance and angle to a story, a grateful audience getting to hear every voice….of criticism.

Some dodgy semantics going on….the ‘critics’ know ‘Tax’ is strictly inaccurate and a weak point in their argument, so they have fished around for some other pejorative, negative word and come up with ‘penalty’.

Still don’t hear the BBC giving a similar treatment to the other side….when do we hear of the featherbedded ‘Selfish House Blockers’, as some might call them, keeping disadvantaged families living in appallingly overcrowded conditions because they want to keep receiving their state handout of the ‘I’m All Right Jack Subsidy’, as some might call it?

On a slightly different matter……This [reference the leaflet from Eastland Homes Housing Association above] should perhaps been a warning to Grant Shapps from coincidentally almost exactly a year ago:

@eastlandshomes We’ve all seen your blurb about ppl on the dole drinking and playing bingo etc.You are a disgusting organization #bedroomtax