Today has shown perfectly why you should despair if you think ‘radical’ Islam is a problem for Europe.

A Muslim drives a truck into a Christmas [Christian] market killing 14, injuring many in a deliberate attack.

What is the response from the BBC, the intelligence community, Royalty towards a radical Islam that is at war with the West?  Not the real threat.

Instead blame the Right, warn of the threat the Right poses, the threat ‘populism’ poses…and conflate them all with violent Far-Right groups.  Bury the truth along with the victims of ‘Radical’ Islam.

On the Today programme we were told the problem was not immigrants but immigrants being groomed once they were in Europe….thus you are supposed to conclude that it is a failure of Europe to stop radicalisation that is to blame not the immigrant himself…they are the ‘vulnerable victims’.  This narrative was backed up by ex-MI6 spook Richard Barrett who said the real question was why would someone want to spread terror?, telling us that it was alienation, marginalisation and discrimination that disassociated them from Society.  So again…it is our fault.  Why though is it so often only Muslims who ‘radicalise’, terrorise and kill people?  That’s the real question.

Later on John Humphrys wanted to know how we can stop radicalisation…first understand, admit, who and why, but no, all we got was another tale of immigrants being radicalised by people in Germany already.  However…the ‘big piece’ we are all missing, is the real problem….’cumulative radicalisation‘ no less.  What’s that?  The rise of the Far-Right of course. Others might call it ‘self-defence’.  When terrorists hit on 9/11 we invaded Afghanistan then Iraq….is that ‘radicalisation of the Far Right‘…is Tony Blair a fascist or worse, a populist?  I heard it was a justified response to a terror attack.

Anyway, as said before in the last post, the Far-Right would not be on the rise if the likes of the BBC had not worked to open the borders and flood Europe with people who have no loyalty and no desire to integrate into European societies in their millions.  Keep smacking someone around the head for long enough telling them how good it is for them and they’re bound to eventually hit back.  What’s that favourite Lefty word?  Blowback.

Then we had Prince Charles on Thought for the Day [0748] giving us a highly political sermon that essentially equated the Muslim terrorist and his fellow travellers in Germany with Jesus, Mary and Joseph…the Holy Family being refugees themselves.

If you were not a republican before you probably are now as you were treated to a highly misleading and dishonest interpretation of what is happening in the world.  Charlieboy told us of the terrible persecution of Christians, of Christians attacked and driven out of their own lands, not just Christians but Yazidis, Jews, Ahmadis, Bahais and other minority groups.  What he didn’t mention was who, what religious group, was doing the persecuting around the world….Muslims.  He then went on to raise the spectre of the 30’s again and said it was beyond belief that such a thing could be happening once more in Europe….yes Jews are being driven from Europe once more, but that wasn’t what he meant.  He spoke of other refugees coming into Europe who then suffered persecution from the ‘Populists’….a pretty disgraceful grouping of all those who voted for Brexit or want to limit immigration with Far-Right groups who use violence.  Again no mention of Muslims or the fact that it is in fact they who are driving the new ‘1930’s’ rise of anti-Semitism, backed by the Left….such as our own Labour Party….and by default those who back open borders like the BBC.

Charlieboy then mentions Islam, or rather Muhammed.  He was a refugee we are told, only wanting to worship freely.  Yes, just like the terrorists now…they do it to make Islam the dominant religion…so they can ‘worship freely’.  Muhammed was a warlord who used the religion to draw in supporters for his wars telling them God would reward them with loot, women and land.  He had a tribe of Jews beheaded, the women and children enslaved and engaged in a campaign of conquest and colonisation that has resulted in the mass oppression and the inhuman mentality of such a vast swathe of humanity.  Forget to mention that Charlieboy?

Prince Charles has spoken out about the danger of religious persecution, warning against a repeat of “the horrors of the past”.

Delivering BBC Radio 4’s Thought for the Day, the Prince of Wales said the rise of populist groups “aggressive” to minority faiths had “deeply disturbing echoes of the dark days” of the 1930s.

In the Christmas message, he urged respect for those of different faiths.

Then we have the video at the top of this post.  A Newsnight film…

Is the “alt right” on the rise in Europe? And if so, is it a fringe movement – or something bigger than that? BBC Newsnight’s Gabriel Gatehouse reports from Austria and France.

Gatehouse didn’t actually listen to what was being told to him.  He had a narrative and he stuck to it….what we got was a constant drumbeat warning us of the rise of a new Nazi regime….Gatehouse freely used words like ethnic cleansing, Nazis and references to concentration camps.  No analysis of the issues that politicises these people just condemnation and demonisation.  In other words just the usual BBC dangerously dismissive and contemptuous treatment telling us these groups had ideas ‘beyond the boundaries of the acceptable’…..er like controlling immigration and stopping Islamisation?  Very controversial.

Gatehouse ran through a list of ‘Far-Right’ issues to probe their ‘Far-Rightedness’…gays, Jews, ethnic minorities…er well that would include the Church of Engalnd then as ‘Far Right’ and Muslims of course…only yesterday the BBC was accusing the Cof E of institutional racism….and gays and Jews have never been top of the Christian church’s hit list (or rather…)…nor of the Islamic community’s.  Those under the inquisition actually said they had no problem with any if these issues.  Damn…Gatehouse had to try another tack.

Gatehouse hilariously asked if the ‘Far Right’ people he was interviewing had any gay friends…and thought it odd, and obviously an indictment, that they didn’t.  Yep he really did pull that old chestnut out of the fire….’I have a gay friend…so I can’t be prejudiced’ but turned on its head…’I have no gay friends, therefore I am homophobic’.

They then tell him that Jews are forced to flee Europe because of Muslim attacks and Gatehouse’s voice over then came up with the paradoxical gem that ‘Islamophobia is the new anti-Semitism’.  No Gatehouse, Islam is the new anti-Semitism….an irony, and a fucking disgrace, that Jews cannot go to university in Britain because of Charlieboy’s mates in the Gulf just as he preaches to us about ‘Islamophobia’….. 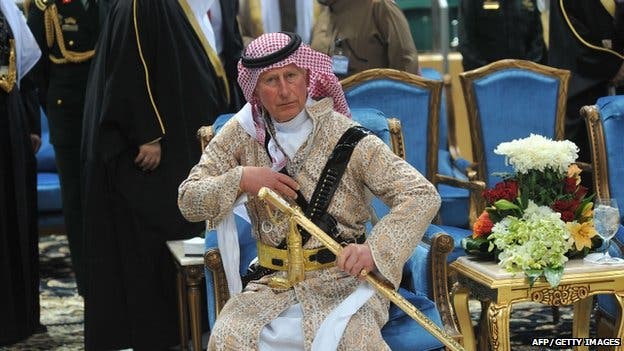 Some of Britain’s leading universities are becoming no-go zones for Jewish students because anti-Semitism is so rife, the first ever higher education adjudicator has warned.

Baroness Ruth Deech, a cross-bench peer who formerly held the highest office dealing with student complaints, said that institutions may be failing to combat hatred against Jews as they “afraid of offending” their potential benefactors from Gulf states.

“Many universities are in receipt of or are chasing very large donations from Saudi Arabia and the Gulf states and so on, and maybe they are frightened of offending them,” she said. “I don’t know why they aren’t doing anything about it, it really is a bad situation.”

These ‘Fascist’ ironically want a pan-European identity but with national identities maintained…strong European borders but ‘soft’ and pluralistic within.  Almost BBCish….or is it ‘Fascist’?

Hilariously Gatehouse complains that multiculturalism has lost its attractions and now the politics of identity has taken over.  Er what?  Identity politics is a classic left-wing approach to society…divide and rule, everyone divided up by race and religion and offered policies to suit each and every group in order to win their vote.   A famously left-wing tactic.  Multiculturalism was all about identity and ‘celebrating diversity’…in other words separate identities.  But now it’s a bad thing, in fact a totally diffferent thing, something to label the Right with as yet another example of ‘Fascism’.  On the BBC’s ‘Muslims Like Us’ you’ll see the devout Muslims declare that they are ‘Muslim first’.  Not ‘Britain first’ then?  No shock and horror about that though.  It is, apparently, not just Fascism that results from the ‘new’ identity politics but ethnic cleansing as well as Gatehouse goes on to explain as he links to another issue….a group in France says that if immigrants don’t want to integrate they will offer them money and the chance to go to a country where they will feel more at home…not force them but offer them.  Gatehouse says this is ‘ethnic cleansing’.  Never mind the UK government already does it.

Are you starting to get the idea that Gatehouse doesn’t have a clue what he is saying and what the reality is and has his own agenda to peddle?

You actually struggle to see what the spectre of the 30’s is here…just what are the policies and ideas that Gatehouse says are ‘Far-Right’ or ‘ethnic cleansing’ or have the whiff of the concentration camp about them or have ‘scary connotations’?  They all seem fairly mainstream and indeed already put into practise by many governments.  Gatehouse comes with preconceived ideas about these people and completely ignores what they actually say preferring to overlay everything with his own narrative, colouring what they say in the darkest tones when such an interpretation, at least from what they said on film, is far from the mark.

Gatehouse in essence has ‘faked’ a film, producing something that is indeed reminiscent of the Thirties…the propaganda films of the Nazis.

Interesting to see that the Right-wingers are all young, educated people….yet another BBC lie laid to rest that it is just ignorant old people who don’t want to see the wonders of the über-Liberal world vision imposed upon them.