Brexit means terrorism on our streets 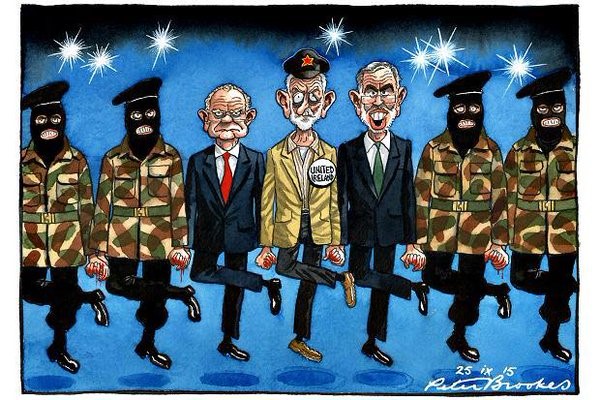 MI5 has had to reassure its European partners about co-operation since the Brexit referendum, the head of the security service says, but the twin fears of terrorism and Russia has meant that European countries still want the UK’s help.

With a marked increase in the number of attacks in Europe, the committee said the government should be more forthcoming on any potential risks associated with Britain leaving the EU.

The annual report of the Intelligence and Security Committee provides the most detailed overview of the work of Britain’s spy agencies.

The committee, chaired by Dominic Grieve MP, said that the last two years had seen a rise in attacks in Europe leading to questions over the capability of some countries to deal with the threat.

So the BBC’s headline and opening narrative is that MI5 has said Brexit is a threat to security.   Hmmm…except this is a report from a Parliamentary committee [and of its 9 members 7 look to be Remain voters] not MI5 and its press release makes absolutely no mention of Brexit….what it does make a big deal of is the major threat of islamic terrorism and cyber terrorism from Russia, China and Iran.  Why does the BBC lead on Brexit then?

What does the full report say on Brexit?

MI5 has assured us that the UK’s decision to leave the European Union will not adversely impact on its membership of, and participation in, the CTG [ Counter-Terrorism Group ].

MI5 told us that there are currently “unprecedented levels of cooperation with 5 EYES, CTG and a [tri-Agency] approach”.

The BBC and Remainers like to suggest any hint of a border will mean terrorism will begin again in Northern Ireland…and yet we know that the terrorist threat has been severe for years and has never gone away…as MI5 admits in this report:

We commend the efforts of MI5 and the Police Service of Northern Ireland in limiting the number of Northern Ireland-related terrorism attacks……it is important that they are able to maintain the current pressure on the ‘new IRA’, in particular.

You might think that merited the headline not Brexit fantasies.  The IRA are still out there, Corbyn’s mates, a severe and substantial threat to the UK.

There is no real concern about Brexit at all in the intelligence services…most dealings are between countries not with the EU….and it is in fact lack of cooperation between EU countries that is the real concern…

We have asked the Agencies how Brexit could affect their relationships with European partners. GCHQ reiterated the importance of these relationships, but was relaxed about the direct implications: I think all our partnerships have been bilateral over the years. So we have never done anything through the European institutions, except some cyber security advice.

The threat from international terrorism transcends national borders, and the recent attacks on the European mainland have clear ramifications for the UK. The attacks have led some European countries to question the capabilities of their security services, particularly regarding their ability to work collaboratively.

The only concern is that data sharing is continued…but that is merely a legal process to be properly carried through…not a major problem…after all we share data successfully with many countries such as the US and Australia and Canada.

GCHQ did have concerns as to how European data sharing would work after Brexit: The only area where I think there will be some implications, yet to be decided, is on data legislation and how that develops. I imagine, once we are not part of the EU, there will need to be some provision, as the US have with their privacy shield, or whatever it was called, Safe Harbour, because… companies, the big companies, will need to be able to share data in a way that is legally compliant on… both sides, the UK and the EU.

It should be remembered that the chair of the committee, Dominic Grieve, is a hardcore Remainer….and this perhaps shows in his political point….which the BBC takes as a neutral piece of concerned advice from the committee….

Whilst we accept that the Brexit negotiating strategy is not a matter for this Committee, the decision to leave the EU clearly has direct and indirect implications for the work of the Agencies – and these are well within this Committee’s remit. We therefore disagree that this is purely a political matter.
European mechanisms play an essential role in the UK’s national security, particularly at a time when the Agencies have all emphasised the importance of enhancing their cooperation with European counterparts. We urge the Government to be more forthcoming with its assessment of the associated risks of the UK’s impending departure from the European Union, and the mitigations it is putting in place to protect this vital capability.

Yet another example of the BBC choosing to emphasise and concentrate on issues that it wants to sensationalise when the truth is there is no real story there at all…This is BBC scaremongering and the continuation of the anti-Brexit Project Fear.

The BBC is utterly corrupt, dishonest and untrustworthy as a ‘news’ agency.

13 Responses to Brexit means terrorism on our streets