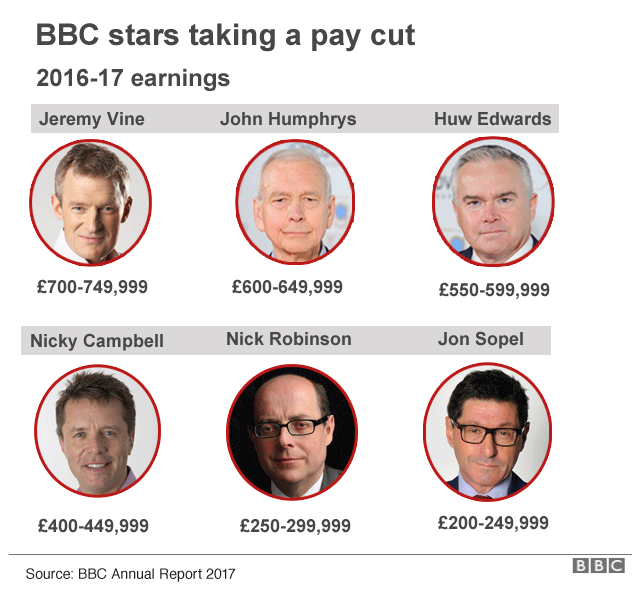 Only last July Lord Hall Hall was telling us that he paid his ‘talent’ so much because they are worth it and it is the going market rate, don’t pay it and there will be an exodus of talent…….

“I completely understand that to lots and lots of people these are very large sums but we are a global broadcaster, in a very competitive market,” Lord Hall told BBC Radio 4’s Today programme.

“And we have to be competitive but not foolishly.

“No-one would want us to be paying sums where it’s not at a discount to the market. People expect us to have great broadcasters, great presenters, great stars but pay them less than they would get in the market.”

He said he was “satisfied” that every one of the 96 top earners were worth the money.

Hmmmm….well, they were not worth it.  They were given that money purely because the BBC had so much money floating around, they could pay it so they did…which might indicate the licence fee should be cut….and more salaries cut.  Let’s experiment….offer far lower wages and see if the people recruited are a match, or more than a match, for the supposed superstars we have now.  So what if they do decide to eventually head off to the mega wages of the commercial world?…recruit more people, fresh talent that will bring new life and vibrancy to the BBC instead of the entrenched, aged dinosaurs who dominate the place now.

Lord Hall Hall always insisted that he had to pay the market rate to get top talent and that they would flee the BBC to the commercial companies if their wages were cut.  Well now we will find out….and as said, perhaps find out if there is more talent, and cheaper talent, out there than the BBC believes.

Amused to see Sopel is having a cut…this morning he was chuntering on about how inconsistent the White House was [under Trump…never, ever, happened under Obama],  one minute they’d say one thing and later they might correct the story…..never happen at the BBC of course….from the Telegraph….

A source said: “This hasn’t been handled very well.”