As seasoned B-BBC readers are all too aware, the BBC has an unpleasant habit of editing elements of its stories, without changing the ‘last updated’ timestamp in the article header – an activity known as stealth editing.

The corporation was at it again today in its coverage of the failed Russian mission to send a probe to Mars and return with material from the planet’s surface. The Phobos-Grunt launch saw the probe trapped in Earth orbit and gravity slowly bringing it back through the atmosphere. Today was the day the splashdown happened, and Auntie’s science correspondant, Jonathan Amos, made sure the write up contained suitably dramatic imagery to capture the spectacle of re-entry. 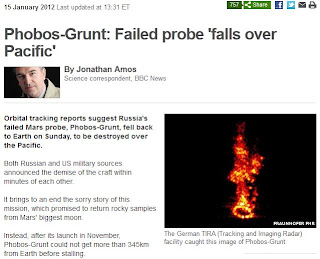 Only the image used was nothing to do with the re-entry and was a radar image with colouration added and it was taken five days ago. The Watts Up With That? blog highlighted the BBC’s sloppiness and explained how radar images are in fact colour-free.

Sometime this afternoon, after WUWT published their blog posting, the BBC replaced the image on the story as you can see below. 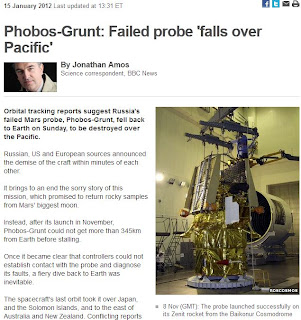 The sharp-eyed of you out there will notice that the BBC has tried to hide the alteration by not updating the ‘last updated’ timestamp. Yet again we have an example of stealth editing. In this case it is just a change of image. However, often it is the copy that is altered and at times it is done in a way that changes the emphasis or context of a story so the revised article reads very differently to the original.

Is it just sloppy web management, or is it a case of, “Nothing to see here, we didn’t get anything wrong and correct it after a blog in the US highlighted our mistake”? Either way, it has created a niche for a website called News Sniffer which records many of the BBC’s article revisions for comparison purposes.

It is a terrible indictment of the BBC that because of its stealth editing behaviour and habit of quietly tinkering with news articles, a resource like News Sniffer has become so important.

On Saturday a number of national and regional media outlets reported the story of 10-year-old boy attacking two female teachers at his school ‘in Avalon Road, Orpington’. It resulted in both teachers being taken to hospital – one with a broken leg and dislocated kneecap and the other bearing facial injuries.

None of the outlets went into any more detail, not even the name of the school or its background. Instead the Autonomous Mind blog was left with an exclusive about the school, Burwood School, an establishment for boys with special educational needs that has a number of troubled and previously excluded youngsters on its small roll. No other media sought out and reported these details.

Some hours later the details carried on Autonomous Mind, including the elements of the 2011 Ofsted report cited in the blog post, were picked up by BBC London who despatched Paul Curran to the previously un-named school to deliver the details in a BBC London news report.

But being the BBC, the report just had to include a different slant that furthered a favoured and seemingly unrelated pet narrative. This saw Curran lead in to a televised quote by a teaching union official from an un-named union, who himself was also un-named, by saying:

One teaching union expects the situation to get worse because of the economic downturn.

But can you spot any mention of the economic downturn in the official’s broadcast assessment of attacks on teachers by their pupils, quoted in its entirety below?

In today’s society, where lives are difficult, stressful, often chaotic, it’s no wonder that very occasionally children go completely off the rails.

There could be any number of causes for lives being difficult, stressful or chaotic. But the BBC has decided the cause of an increase in attacks on teachers will be as a result of the economic downturn.

This isn’t factual news reporting, it is opportunist speculation mixed with personal opinion, pushed on viewers without any supporting evidence whatsoever. And it deliberately ignores the particular circumstances of the incident at Burwood School given the challenging nature of the school’s troubled pupils.

It has no place on a publicly funded service broadcaster, but it happens over and over again.

How wonderful it is that my debut post here on Biased BBC times perfectly with a nugget of a post over at Bishop Hill, which underlines the BBC’s reputation for telling half the story all the time.

The subject is climate change, so once again our eyes turn towards the Socratic wonder that is the BBC Environment Analyst, Roger Harrabin. Speaking as a member of what appears to have been a panel of prestige-laden experts in front of an invited audience a few months ago, Harrabin had this to say:

Biased to his rent seeking, vested interest heavy core, one notices how Harrabin is yet again distorting reality. Where in his analysis is any mention of the overwhelming of climate change sceptics who say, ‘The climate is changing and always has; and scientific evidence shows it has been both warmer and cooler in the past as a result of natural factors we aren’t even close to understanding, therefore mankind’s influence could very well be grossly overstated’?

Harrabin has deliberately set out yet again to paint what passes for debate about climate change as warmists on one side and ‘deniers’ on the other, while airbrushing mainstream scepticism out of the story. This is another example of the bias at the heart of our public sector broadcaster, which consistently abuses its monopoly on ‘news’ reporting to condition the mindset of those compelled to pay for such output.

Far from climate change sceptics being deniers, the real deniers are the likes of Roger Harrabin, who load their reportage with bias and distortions and ‘educate’ fellow Beeboids to adopt the same narrative.

The BBC, it’s what they do.