Today‘s Evan Davis and BBC political correspondent Louise Stewart had a lot of fun at the expense of David Cameron and Nick Clegg this morning over their disagreement over internships. They returned to the subject later, after which Evan talked to Gus Baker. The Today website describes Gus as “a student and co-founder of pressure group Intern Aware.” Evan Davis described him in similar terms on the programme. Mr Baker criticized the prime minister.

Is it unreasonable to think that Mr Baker’s Labour affiliations should have been mentioned?

The same question applies to BBC Online’s write-up of the same interview (Cameron and Clegg differ publicly on internship places) which merely describes him as “from the pressure group Intern Aware” (and generously links to his website).

The Today programme interviewed no-one other than Gus Baker on the subject.

Been very busy so less blogging than desirable BUT I did listen to this hilarious exchange on Today this morning. It all concerns a report by Will Hutton (Be still, BBC beating hearts!) that public sector pay ratios should be capped at around 20;1. There is a wonderfully surreal socialist conversation (At the end of which Humphrys suggested sacking top private sector bosses, who are, as we all know, evil) and I couldn’t help but wonder why no one brought up the ratio between what some BBC assistanbt researcher might earm per annum compared to, oh I dunno, say a Radio 4 and BBC Mastermind presenter? To the nearest %. 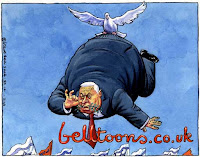 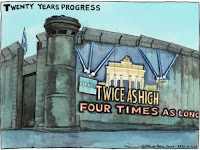 The Guardian’s favourite cartoonist.
“Steve Bell – At the centre of our culture”
(David Yelland. Today radio 4.)

Update: New Sharon cartoon to replace previous image that wasn’t by the Guardian’s favourite cartoonist Steve Bell. Sorry for any inconvenience, and thanks to Mr Gregory for pointing out my mistake.

I’ll post a new Open thread shortly but the BBC has been biased beyond belief on Today his morning and I wanted to cover a handful of these items.

It all kicks off with the news that BBC DG Mark Thompson had been spotted going into Downing Street and photographers had been able to take images of the papers he was carrying. The suggestion was that Thompson could be trying to collude with the Coalition over the coming cuts. Oh no! As if to make up for that horrible thought, Today went into pro-Labour overdrive….

Ed Balls was given a slot just leading up to the prime-time 8am news slot to rant and rave about how he would save the economy. (Ignoring how he had been there as it ran into the bumpers. Remember Year Zero – all troubles started when the Coalition came to power)  He was allowed to serially criticise and misrepresent George Osborne and then talk economic gibberish. No Coalition come-back, naturally.

Then, straight after the 8am news, we have Lord Prescott on to attack the evil  “Murdoch Press”, quoting favourable from those organs of reason, The Guardian and the New York Times. There was a distinct air of bonhomie between Humphyrs and the fat oaf who was our Deputy PM.  No opposing voice allowed, naturally.

Just when I thought this was going to a Conservative-free zone, up pops Bercow to pontificate on the Hague sideshow. Ah, but it’s SALLY Bercow, that well known Labour enthusiast. Given the BBC’s embrace of the gay agenda in almost every other walk of life, I find their sniping at the Foreign Secretary revolting.

Then, to finish, in all fairness the BBC moved away from Labour for a minute. Time to talk about Hamas. There was yet ANOTHER apologist for Hamas being given free rein. Yet again he was allowed to get away with spouting the most obnoxious pro-Islamic terror propaganda with no voice of opposition. Why does the BBC have SUCH a love-in a for the vicious Islamic killers from Hamas?

This was a thoroughly disgraceful programme from start to finish, an example of why the BBC needs axed. They must not be allowed to broadcast their bias at OUR expense. Maybe when they are stripped of our License taxes, they can turn to the Trade Unions for funding, like their pals in Labour. That way we can see them as the bought and paid for whores they so transparently have become.