In his August 10 despatch from Tyre, Jim Muir described “Walking in fear in Lebanon’s no-drive zone”. Even ambulances, he said, were in danger of Israeli air attack.

Around the corner is the Lebanese Red Cross. Lots of ambulances outside, immobile. Then the sound of an engine, and one moves.

“Don’t worry, I’m just parking!” shouts the driver. He is Kassem Shaalan. He knows what it is like to be hit by a rocket.

On the evening of 23 July, he and two other medics answered a call to rendezvous with an ambulance from Tibnin, in the hills to the east, to relay three civilian patients down to Tyre.

Both ambulances were struck precisely by separate rockets as they were stopped at the roadside near Qana for the transfer.

It was 2230 at night. There was nothing else on the road. They were clearly marked, and lit up with flashing blue lights and illuminated Red Cross flags.

Kassem, his two colleagues, the three medics in the other ambulance, and the three Lebanese patients, were all injured.

One of the patients, 38-year-old Ahmad Fawwaz, lost his leg in the ambulance. His mother Jamileh, 58, and son Ahmad, 8, were both seriously injured.

But they all survived. And Kassem is back at work.

“Until now, we don’t understand why they did it,” he says now. “It has confused us. But it will not stop us. I’m still wearing the Red Cross uniform, and if they tell me to go, I’ll go and help.

“Because of the Israeli warning, every movement we do goes through the International Red Cross,” he says.

“They ask Israel for permission. If we have it, we go. If we don’t, we can’t. We get many calls from villages saying they have injured people, but there is no permission to go. Yes, people could be dying because we can’t get to them in time. If you don’t get treated within one hour, you are much more likely to die.”

A sad state of affairs indeed, reinforced by the BBC’s picture (picture 7) of the damaged ambulance, complete with “in this incident one patient lost a leg“. 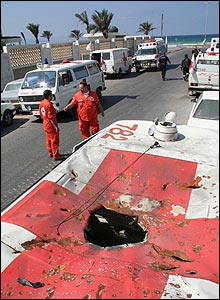 Unfortunately the story appears to be complete nagombi from beginning to end, from the precisely targeted ambulance, through the drivers injuries, to the mysterious missing leg.

Zombietime has details which comprehensively demolish the BBC version (one example – the hole in the ambulance roof is by strange chance exactly the right size to take the red domed vent cover fitted to Lebanese ambulances. Even the BBC photo shows the screw holes).

Now I’m sure Jim Muir doesn’t go out to concoct a story which will put Israel in a bad light. But such a story, presented to him by Lebanese sources, has two characteristics which appear to have resulted in an absence of even the most basic fact-checking, such as “is this what a vehicle hit by an Israeli missile looks like ?“

One – it fits the BBC worldview.

Two – it’s just such a good story. Why ruin it by fact-checking ?