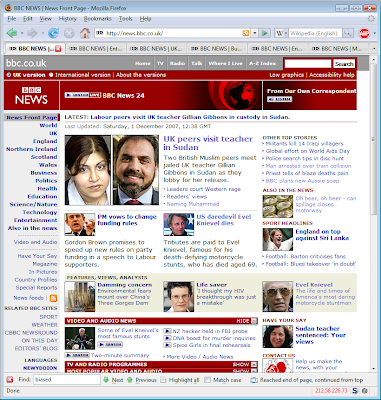 As you can see, the two peers (and there were only two) on the diplomatic mission seeking Gillian Gibbons release from Sudanese ‘justice’, are the Labour peer Lord Ahmed and the Conservative peer, Baroness Warsi, yet for some reason, our Beeboid friends natural assumption is that both are Labour peers. Why is that?

This lazy assumption on the part of the Beeboids responsible smacks of the patronising leftie presumption that Muslim must equal Labour – there can be no other explanation for cocking up such a basic and easily checkable fact – but did the Beeboids bother? (And would anyone who is interested in current affairs, let alone a supposedly professional BBC journalist, really not know that Baroness Warsi is a Conservative?). No, they got straight on with bigging up the supposedly Labour credentials of the two peers in the delegation.

This stupidity wasn’t limited to BBC Views Online – according to Biased BBC readers it also featured in reports on Radio 4 and Radio 5 Live on Saturday afternoon… surely someone at the BBC should have noticed this huge smacking error before such nonsense made it on air?