NOT EVEN A HINT OF BIAS 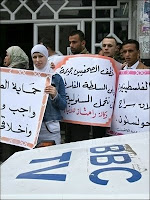 We all know that BBC journalists are the very model of professional impartiality, right? So, have a look at the attached image. Dozens of Palestinian journalists demonstrated on Wednesday morning at Bethlehem’s Church of Nativity in protest of the Israeli arrest of journalist Hassan Abdel Jawad. They called not only for the release of the journalist, but for “political prisoners”. (Terrorists to you and me!) Head of the Palestinian Journalists Union, Naim Toubassi, said that the arrest of Abdel Jawad is the latest proof of the Israeli “policy of repression and harassment, not only against political activists, but also against journalists who transmit the truth and exercise their right to freedom of opinion and expression.” Can you guess which State broadcaster was part of the fun? Mmmm..maybe they just provided the taxi service, what do you think? The bias is endemic folks, and only the voluntarily blind can’t see it.

37 Responses to NOT EVEN A HINT OF BIAS