They’re .. er .. somewhat different in tone, to put it mildly. And they must have used up all the website’s scare quotes in 2004. Then we had :

‘Liberty’ at the heart of President Bush’s foreign policy.

Rice begins work on ‘great cause’.

What Bush means by ‘liberty ‘US vote ‘mostly free and fair’

Admittedly the 2004 page is post-inauguration – but I don’t remember coverage of the result being quite so “Lift up your heads, O ye gates, that the King of Glory may enter in“. Indeed, I recall a certain gloom creeping in at the time the results were announced – one observer claimed that “every single BBC reporter looks like they have just swallowed a wasp“.

You may remember that after 2004, the BBC’s post-election theme was ‘Divided America’.

Although the 2004 vote was 51/48 and the 2008 vote was a not-radically-different 53/46 percentage split, I somehow think that the ‘Divided America‘ theme will go back in the toybox for a few more years.

Not that the BBC weren’t following the pack. 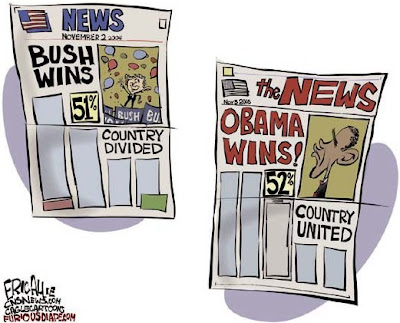 16 Responses to Compare And Contrast …