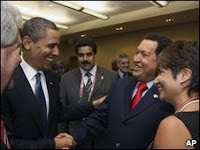 It’s easy to understand why the likes of Justin Webb gets so excited about the Obama Presidency. The hard-left ideology that underlines Hopenchange resonates precisely with that running through those employed by the State Broadcaster. Despite a short period in power, Obama has managed to cuddle up to just every tyranny in the world. Naturally this excites the BBC, and so when Obama embraces Venezuelan thug Chavez – smiles all round. It’s incredible to compare the unrelentingly favourable coverage Obama gets from the BBC compared to the unrelenting hostility Bush got. The BBC’s troupe of in-house comedians still make jokes at the expense of Bush but when it comes to Obama, silence. So long as Obama is being nice to Iran
to Cuba, to Russia, to those poor oppressed Palestinians – all is well in the BBC garden. We observed the same during the Clinton era but Obama has already demonstrated his much more extreme leftism and that ensures he becomes the poster boy for those who dare to claim they are an impartial news gathering organisation.

16 Responses to THE OBAMA-CHAVEZ LOVE-IN