A candidate for gratuitous and unnecessary pr-Obama report of the year month week perhaps?

This is where you can discuss any BBC-related issue that concerns you.

On the subject of caving in to pro-Palestinian pressure, something unusual appeared in the Independent yesterday. A letter from film director Gary Sinyor, recipient of the award for Best British Film from the EIFF 1992 for his film “Leon the Pig Farmer” (Do read it all)

He explains eloquently why Ken Loach was wrong to threaten the Edinburgh International Film Festival, forcing them to hand back the £300 sponsorship money from Israel…… or else.

“To repress the freedom of a film festival, to blackmail it, because it has accepted £300 from a government body to fly over a film-maker is petty and outrageous.[…..] “to acquiesce to this blackmail is more outrageous still. [……..] “To be seen to give in to extremists is simply not an option.”

Amen to that.
Meanwhile, back at the BBC, they’re still promoting Loach’s latest film.

Caving in to this sort of pressure seems to be the order of the day, and sad to say, the BBC’s twin habits of doing that and vilifying Israel epitomise the downward spiral we’re in.

The BBC probably thought they were doing their bit for balance by inviting Helen Szamuely of the Eurosceptical blog EU Referendum onto a discussion with Zainab Badawi.

On the other hand, they might have considered that UK feelings about the EU are not at all warm, and that two pro-EU bloggers out of three was a touch imbalanced. There was Nosemonkey, a “critically pro-EU and centrist” blogger, Shiraz Socialist, a “moderately angry nouveau-middle-class leftwinger” (I’ll refer to him as SS), and Szamuely, a lovable if crotchety Eurosceptic (I am sure she will love the description). Of the three, I am pretty certain Szamuely’s blog has much the largest readership (circa 3000 daily visits).

Then again, perhaps we should look at another metric- time alloted to speakers. In this regard, by my rough reckoning, Szamuely got 92 seconds, Nosemonkey 112, and Shiraz Socialist 134. Shiraz also got the last word, in which he claimed that EU institutions need to be strengthened. He had also been given the first word, fed to him by Badawi, that politicians in general were in the doghouse. Very conveniently, following that the whole discussion managed to omit mention of which party are firmly in the doghouse. People were angry with the recession, they said, but the “L” word went missing.

Now to the tone- it was clear that Badawi was “ready” for Ms Szamuely. She interrupted her several times and disputed with her the “usefulness” of the EU Parliament (Szamuely had a ready retort about Commission overrules of Parliamnetary objections, but that got lost in Badawi’s hectoring). Badawi interrupted her too when she mentioned UKIP, clarifying who they were while Szamuely was in full flow. Then, during the discussion wind up, she told Szamuely (who we have seen got less time) to say “briefly” how she saw the UK public mood, and repeated that “briefly” so that she could give time to… SS.

She did not once interrupt SS, nor dispute with him when he claimed that EU institutions need strengthening, nor when he stated that people were angry about the (his word) “laissez-faire” economics of recent times. She even murmurred, “mmm, yes” at one stage.

Nosemonkey was mainly there for posing value, but he managed to slip in a cheap jab about Tory MPs resigning over expenses which Badawi… let go, surprisingly.

All in all then, a startlingly biased presentation, once you look closely. But see for yourself and make up your own mind by watching the video on EU Referendum’s blog.

There seems to be some confusion as to whether £30,000, an apology, or just an offer of an apology is on the table, but it does appear that the Muslim Council of Britain has demanded one or all of these from the BBC, and that the BBC has acquiesced.
Certain remarks were made by Charles Moore when he was a panellist on Question Time that the MCB consider a slur. His remarks were very similar to those made in a letter from Hazel Blears to the Guardian which she is not apologising for, and which seem to substantiate Mr Moore’s remarks.

This news raises ‘Many Questions’, for example:
Why didn’t the MCB make as much fuss over the disgraceful demo in Luton as they’re doing over the ‘slur?’
Or: Will any criticism of the ROP soon be made illegal?

Just to say that in an effort to improve site loading speed, I have removed my Twitter and also the video bar. I feel these have not worked and some have misunderstood why I placed my Twitter here. I have tried to bring more interactivity, greater responsiveness – including the weekly liveblog – but accept that these haven’t worked as I wanted. We are also planning to restore haloscan comments in the next few days. At that point, I think my work is done.

The essence of this site is BBC bias. I have approached this from MY perspective and angle all blog posts accordingly. I write to my own style which people can love or loath. I know that this sometimes brings trolls and perhaps that brings the site problems. It is not my intention, as I do not control trolls, it is they who haunt me.

In summary, I have come to feel I am more of a liability to this site than an asset and perhaps it can grow without me.

“On the surface Naseebah Bibi did not appear to be an out-of-the-ordinary figure”, according to BBC correspondent Ruth Clegg.

We’ll let you be the judge of that : 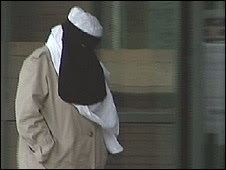 Anyone know why Bill Cash MP has been splashed all over the BBC website frontpage for most of the day? As someone who gets most of his news online, I have to say I wonder. I can’t see it now but I am certain earlier today that there was a reference to him as an “arch-Eurosceptic”. I know many might just be happy to see an MP in the stocks for a day, but the way all this has been conducted very much suggests to me a studied campaign. Yes, this originated from the Telegraph, but the BBC has very much played ball- very much the old footballing one-two. Yes, there is an extremely serious point about MPs’ abuse, but there was also (as with most jobs) a legitimate need for an expenses program in pursuit of the goals of the job (ie. constiuency representation). Not defending MPs who trough here, but raising the question about the legitimacy of this broad based campaign against MPs, and asking cui bono? It certainly might seem a matter of luck whether an MP is targeted or not (disturbing enough, as it’s so inefficient)- but the BBC has seemed determined to focus on backbench Tory MPs- Cash, Kirkbride, McKenzie; seems to me Blears, Smith, Balls and what’serface have got off more than lightly… given their frontbench Government status and all.

So I would raise a question about which discredited and miserably failed party stands to gain from spreading the blame across the whole House of Commons for the indulgence combined with ineffectiveness of the chamber and its leadership during the last ten years (plus)?

This is where you can discuss any BBC-related issue that concerns you. Please use it sensibly, no abuse and no trolls!

Anyone catch this discussion on the BBC between William Hague and David Miliband this morning? It seemed to me that Hague was given significantly less air-time that Milipede who was allowed to keep interrupting him and was also granted the final say. Oh to be a Labour luvvie..