Two stories involving American politicians who have been embarrassed by photos on the internet. One was a little-known first-time candidate standing for the House of Representatives last year, the other is a prominent, well-known congressman who has been in the House of Representatives for over 12 years and has designs on becoming mayor of New York.

Apart from the fact that the BBC rushed to run the first story as soon as it broke in the States, and has tried desperately to ignore the second story for well over a week, can anyone spot a slight difference in the BBC’s treatment of the two? (I’ve provided some helpful clues.) 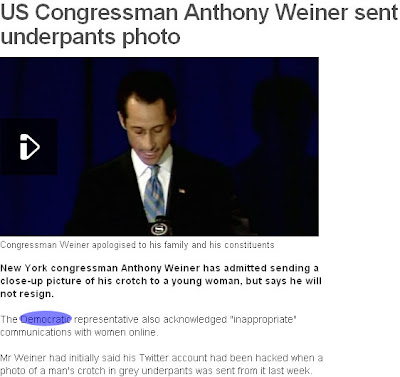 UPDATE. Here’s the report on Weinergate from the Today programme this morning. Spot the missing word.

Richard Bacon, who is doing his show from New York this week, discussed the story yesterday and again there was no mention of the fact that Weiner is a Democrat.

It almost goes without saying, but I’m going to say it anyway – if Weiner had been a Republican we’d have heard about this story a week ago and his party affiliation would’ve been central to the BBC’s reporting.

27 Responses to Spot The Difference