The Unbearable Whiteness of Occupying

Here’s one for you:

Fast Company conducted an internal survey of the #OWS crowd and found it to be as white as the line-up at MSNBC.

The funniest part? The survey results were made into an infographic which was being distributed by some #OWS members until other #OWS members looked at the results of the survey and freaked out causing arguments and fights.

This wasn’t an outside party saying it, either. The guy behind the study is a data analyst for an advertising company.  And he is one of the Occupiers.

Full graphic of the study is below the fold.
Harrison Schultz claims to have been with the Occupier movement from Day One at Zuccotti Park.  In the piece I’ve linked to, he constantly refers to his “comrades”.  He also claims that this isn’t political like the Tea Party, but is in fact a “post-political” movement.  Anyone even slightly paying attention will have noticed that what these people actually want is good old-fashioned anarchy.  Problem is, they’re so deluded, so caught up in the emotion, that they think they really can achieve a new kind of society where there are national organizations, no corporations, and no national democratic system, but there will still be MacBooks, a well-managed and maintained national infrastructure, high quality backpacks and free wifi.  My own discussions with his comrades have shown that.

Now about that graphic. This was published by Fast Company, a hard-Left magazine which promotes innovation and technology. 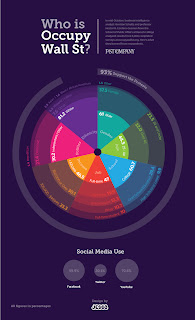 The Occupiers are hideously white. And this was published in a magazine which only recently was cherry-picking photos to create the impression that it wasn’t the case. So where is the BBC on this?  Nowhere.

Let’s recall just how much they tried to tell you that the Tea Party movement was overwhelmingly white, which in itself was supposed to be proof of perfidy, and tried to create a strong association with racism.  Mark Mardell, the BBC’s top man in the US, still believes that the Tea Party is driven by crypto-racism.

Some of us noticed when this all started a few weeks ago (and the BBC rushed to tell you about how important it was, and what they believed it to be) that the Occupiers were mostly white.  Even the BBC’s first vox pops segment featured only white people. Mardell had to go out of his way to find a person of color. Yet this has remained unremarked by the same people who were sure that a lacuna of black people at a handful of events in the Midwest gave them the right to slander millions of people.  If there was a significant percentage of non-whites, the Beeboids would be going out of their way to remind you how superior they are to the Tea Party movement.

So I’m calling out the BBC right now.  Mark Mardell, Katty Kay, Laura Trevalyan, Daniel Nasaw, Matt Danzico, Jonny Dymond, Simon Wilson (behind the scenes), Franz Strasser, Caroline Hepke, Michelle Fleury, Andy Gallacher, and all the anonymous Beeboids furiously churning out content for BBC News Online, and even the various Washington-based Beeboids:  Where the hell are you on this?  Furthermore, why aren’t you comparing the clashes with police, the illegal encampments, vandalism, and calls for violence from the Occupiers with the genteel, law-abiding, civic-minded behavior of the Tea Party movement.  Where are your suggestions of guiding hands, or admissions that people from mainstream US media are enabling and coaching them?

BBC reporting on the US is a disgrace.

20 Responses to The Unbearable Whiteness of Occupying