COME DINE WITH ME… 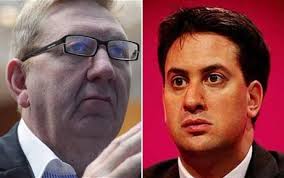 Well then, it looks like “Red” Ed Miliband and Trade Union baron “Red” Len LcCluskey do enjoy dining together. Yes, the uber militant  Unite Leader McCluskey and Miliband have had 8 meals together since Ed became leader – care of McCluskey and the comrades and the BBC dutifully report this. And then leave it there.

No follow up news items on Today or any other programme as to WHY the Labour leader seems to want to dine on such a frequent basis with a man who hangs a photo of Lenin on his wall. No follow up questioning as to how such meetings could be seen by even the most neutral observer as undermining Miliband’s claims that he is not a puppet of the Unions, the Unions whose activism and votes placed him in his current role.

I am sure some people may share MY view that the Labour Party under Miliband in particular is behaving simply as an extension of the hard left Trade Unions like Unite (the single biggest funder) and yet the BBC seem curiously reluctant to flag this up as an issue worthy of prime time discussion. They are, of course, delighted to question every nuance of where the Conservatives get their money, who Cameron chooses to dine with in Number Ten – and in my view rightly so BUT why the reticence when it comes to Labour? If the Labour Party is an extension of the Trade Union agenda, is the BBC simply the broadcasting wing ?

It seem to me that the lack of independence of Labour from those who fund it (Unions now hand over 90% + of cash and non cash funding) is a genuine news story – every bit as important as what Frances Maude says. But it is not something the BBC seeks to run with for reasons we can but speculate.

12 Responses to COME DINE WITH ME…