Kebab Time has some taxing questions for Labour…I wonder if the BBC has any…though Labour’s Margaret Hodge threatening legal action if the BBC asked any questions about Stemcor’s tax affairs silenced them pretty quickly….that and the fact that they weren’t very keen to ‘kebab’ her any way.

Kebab Time posts this from the Times: 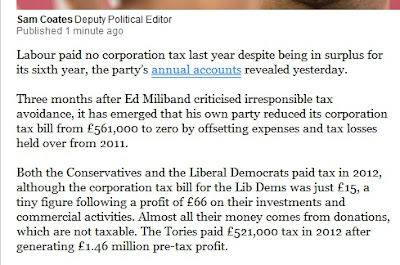 Will Hodge be demanding Labour cough up some of that £24 million they took from the Unions over the last 3 years…you know…..moral duty and all that…just as she suggests all those commercial companies do…above and beyond their legal requirements?

No doubt there is a completely valid technical reason why Labour dodges tax…..still….moral responsibility and all that…eh?

I imagine the BBC would be just as disinterested if it was the Tory party dodging tax…..the Tories paying, according to the Times, £521,000….Labour nothing…and yet Labour has more funding than the Tories…work that out.

9 Responses to Lax On Tax