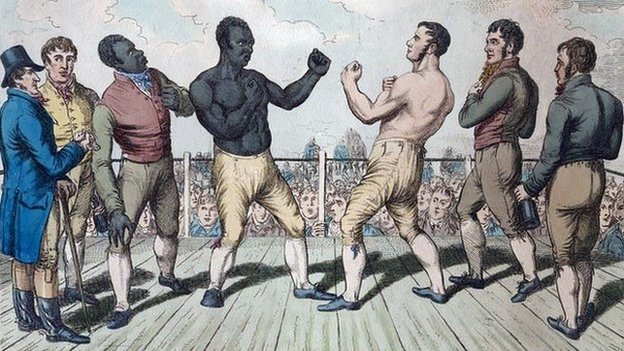 Amazing that the BBC denounces a whole country and its population over a boxing match, especially as the BBC’s interpretation of what happened in the match is coloured by the colour of the two opponents…one black, one white…guess which has the BBC’s sympathy?

The boxing match between a freed slave and a sporting star

In the brutal world of bare-knuckle boxing a fight, more than 200 years ago, between a freed American slave and a Bristol-born boxer remains one of the most controversial and bloody battles in boxing history.

The contest – the first ever world title fight – between Tom Cribb, the son of a Bristol coal worker, and Tom Molineaux, a slave who won freedom with his fists, is an “an incredible story of racism, intrigue, gambling and above all courage”.

There may well have been racism…but not the sort the BBC want you to believe:

Strangely, the main problem that England had with Molineaux had nothing to do with his color–the extreme racism of the late 19th century was still some time off. In fact, the British people were quite willing to give Molineaux credit as an excellent boxer, and his numerous affairs with white women were by and large overlooked. The much greater offense, in their eyes, was the hideous fact that he was an AMERICAN! The idea that a foreigner could take the sacred trophy of British sporting was unthinkable.

Pierce Egan’s Boxiana is the source for the majority of this fight narration. It was composed at a time shortly after this Cribb-Molineaux fight took place by a man who had seen most of the fights of the era.

The BBC gives the impression that Cribb was thoroughly beaten throughout the fight and only won through ‘dirty tactics’ such as a punch to the throat (a potential Tory MP?)…

Cribb was brought time and time again to his knees while the crowd, who sensed a Molineaux victory, subjected the US fighter to appalling racist abuse….

…Molineaux battled on for two more rounds. He threw Cribb to the floor but hit his head against one of the wooden ring stakes which concussed him. Sensing his moment Cribb punched Molineaux in the throat.

Broken, lying on the floor Molineaux raised his hand and said “Massa Richmond, me can fight no more”.

……but such tactics seemed to have been normal…Molineaux for instance putting Cribb in a headlock and punching him repeatedly in the head….Cribb put Molineaux down just as many times.

As for that ‘appalling racist abuse’ the BBC doesn’t list it nor provide a reference where it can be checked…it presumably isn’t in the contemporary report from Pierce Egan unless they mean the anti-American abuse….if so strange they don’t make that clear and prefer to give the impression the abuse was based on Molineaux’s skin colour.

Here perhaps is why:

Bill Richmond was a better pugilist than Thomas Molineaux in 1805 and 1815.  He was such a familiar face on the English boxing scene, as pugilist/corner man/trainer, that he would be cheered over White opponents late in his career.

And perhaps confirms being American was the real problem people had with either of them:

Bill Richmond, despite ‘tainted’ as American born, was thoroughly British.

And it seems that the manipulation of the system was a regular occurrence with Cribb and so nothing to do with ‘race’:

‘….a Cribb/Bob Gregson 1809 English Championship bout.  Gregson was dominating by the 22nd round, a 10-1 betting odds favorite, until suddenly it was over by the 23rd round with Tom Cribb the victor.  Richmond was openly suspicious that Cribb’s patronage and power was affording him more than the legal 30 seconds following a knockdown while an opponent had no mercy.  The combination of patronage (which Cribb had) and gambling wages (better to ‘cheat’ than lose) leaves suspicion over several Tom Cribb victories.‘

Still not sure why the BBC has labelled this as ‘England’s Shame’.  It might well be Tom Cribb’s shame but to somehow transpose that onto a whole nation seems somewhat ambitious even for the BBC’s historical revisionist section that rewrites world history with a leftward, anti-Brtiish, anti-white slant.