The BBC are attacking the government for cutting the police and suggest this has meant the police do not have the resources to gather intelligence from the community about those individuals who may be going down the road of extremism…the above report illustrates that is nonsense…the police know but cannot touch many of these individuals…the BBC is peddling Labour propaganda days before an election on a major, major issue.  The BBC attacks the police for failing to stop attacks when they already knew of these people and their views and then the BBC attacks the government by saying cuts meant the police don’t know who the attackers might be…despite 23,000 being ‘on the radar’…guess the police must be doing some work.

In a previous post I did suggest that the BBC may well be tempted to throw caution to the wind and go all out to get Labour into power.  They may gamble that becoming a blatant propaganda mouthpiece for Labour is worth the risk…Labour wins and Corbyn will reward them rather than take them to task, Labour loses and the BBC knows the Tories don’t have the guts to tackle the BBC and its dangerous bias.  Win win for the BBC and Labour….a Labour Party whose leader has been a very vocal supporter of terrorist groups and who boasts of having voted to block every piece of anti-terror legislation put forward in Parliament….not to mention Abbott and McDonnell who have both followed similar paths to Corbyn.

Why does the BBC not highlight this very, very pertinent accusation….

Addressing a Stop The War Conference in 2011, Mr Corbyn boasted about his extraordinary voting record.

Mr Corbyn told the gathering: “I’ve been involved in opposing anti-terror legislation ever since I first went into Parliament in 1983”.

In the same speech the peace organisation he lead until two years ago, the veteran Socialist also branded new terror laws in Britain as “a greater threat to our security” than even the wars in Afghanistan or Libya.

Have to say that subsequent developments have confirmed that the BBC going all out to promote Labour is a distinct possibility as the BBC pushes Labour’s line about cuts to the police being responsible for the terror attacks because ‘community police officers’ would have provided a link to communities who would then report their concerns about individuals to the police and security services and we would then know who these people were.

Except that is obvious rubbish…very, very obvious rubbish….here’s the top, headline story on the BBC frontpage….note the police officer talking to the extremist….the police already know who most ‘extremists’ are but  their hands are tied…often because legislation to allow them to deal with the extremists has been blocked…by the likes of Corbyn….. 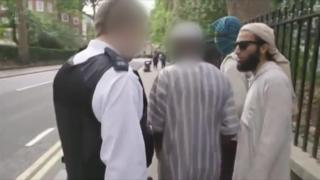 Khuram Butt, one of three men who carried out Saturday’s terror attack, was investigated by police in 2015.

We’ve already noted that Labour proposed cutting the police budget by an extra 10% in 2015 and said that doing so would not harm policing…and that the Tories have in fcat protected the police budget since 2015 and indeed increased massively spending on the intelligence and security services.

The BBC does not remind any Labour spokeman of that awkward fact.

In fact the BBC does very little to challenge Labour’s attack on May as it claims cuts in the police have led to the terror attacks.

This morning Justin Webb gave a platform to Labour’s shadow justice secretary, Richard Burgon, to peddle his propaganda almost without any questioning at all…there was no depth, no context, no intelligent counter-arguments to Labour’s case.  The only point put was that Lord Carlile, the former independent reviewer of terrorism legislation,  said cuts in community policing were “nothing to do with terrorism”, saying “nobody in the security services is complaining about their funding”.

Burgon dismissed this out of hand preferring the politicised police union, the Police Federation’s, version of events and insisting cuts to community officers allowed these terror attacks to happen because we don’t get information from the community that brings the extremists to police attention.

Why did Webb not mention Corbyn’s career long attempts to block anti-terror legislation?  Why did Webb not raise the issue of Corbyn’s opposition to ‘shoot to kill’?  Why did Webb not raise the obvious point that nearly all these terrorists were already on the radar…3,000 who are labelled as of significant interest and another 20,000 of interest but on the fringes.  That the ‘community’ does rpeort these people… hypocritically the BBC attacks the police for not following up on these reports…so do the police know or not know?  Arrests are made everyday and many terror plots disrupted.  Indeed many of these extremists appear on televison, not just C4, but the BBC itself…the BBC famously refused to report suspicions about one participant in a BBC paintballing programme… When C4’s Dispatches produced a programme called ‘Undercover Mosque’ that exposed militant extremism in Mosques the BBC completely ignored the information and the police even tried to prosecute C4 for incitement.  What were the BBC interested in on C4 that same week?  Jade Goody, labelled ‘white trash’ by the BBC, who said something ‘racist’ on Big Brother during an argument…the BBC spent the week trashing Goody, programme after programme discussed and attacked her….but ignored the Muslim extremists spouting racism and religiously inspired bigotry on the other C4 programme. 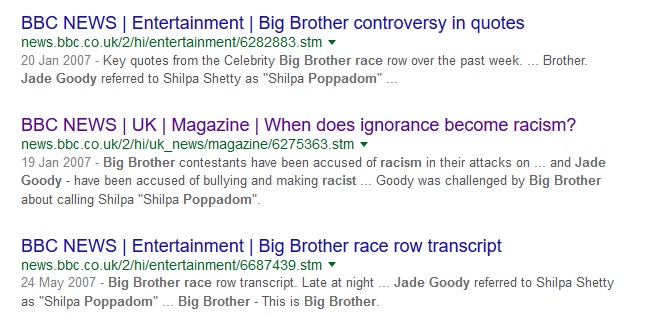 The BBC in fact were accused of lazy journalism by C4 after the BBC’s only report into the Dispatches programme slated it …the BBC accusing C4 of producing fake TV [in 2007?  Surley that’s pre-the post truth era?]

The Channel 4 deputy head of news and current affairs, Kevin Sutcliffe, has criticised BBC News 24 for its “lazy” coverage of the Dispatches Undercover Mosque row – as a leading lawyer claimed the broadcaster has grounds to sue for libel.

The story was picked up by rolling news channels and press agencies. However, the police and CPS refused to issue a further statement – leading to Channel 4 having to defend itself against allegations of TV fakery.

Speaking today at a packed forum organised by think tank Policy Exchange in London, Mr Sutcliffe said he was “disappointed” by how some rival broadcasters had not checked the story.

“Particularly BBC News 24 which really just ran it as a TV fakery story. They framed the debate early on and that was lazy.”

So the BBC completely uninterested in exposing radical Muslim preachers…no surprise there.  The BBC’s own Phil Mackie in fact reports from the same msoque in Birmingham telling us how moderate it is and how it is fighting the extremists’ narrative….but then again he did think the Trojan Horse Plot was fake too.

So Webb completely ignored the one fact that completely undermines Labour’s attack…that nearly all these terrorists are already known to the police…they’re on the radar.

What appeared next on the Today programme just confirms the thought that not only did Webb deliberately dance aorund the inconvenient facts but that the BBC has an agenda.

Scotland Yard says one of the men named as an attacker was known to police and MI5 but there was no intelligence to suggest an attack. Does that suggest a failure by the security agencies? Lord Ricketts is former national security adviser under Cameron.

So not a few minutes earlier Webb allowed Labour to say police failed to stop the attackers because thy didn’t know who they were…then instantly we have a complete turn around and the BBC is complaing that the police did know but did nothing.

As said this is the BBC’s top story now…and yet Webb made absolutely no reference to it when talking about intelligence and the police being able to identify potential extremists….the police know who nearly all these people are…

The Metropolitan Police have defended a decision to downgrade an inquiry into one of the men who carried out Saturday night’s terror attack.

They said Pakistan-born Khuram Butt, 27, of Barking, London, was known to police and MI5 in 2015, but there had been no evidence of a plot.

The police know who most extremists are but Labour says they don’t…the BBC pushes the Labour line.

9 Responses to Known to police