I’ve been away for a few days and am busy catching up on recent blogposts and comments (and excellent stuff it is too).

I see that the BBC has devoted some attention to links between the Gaddafi family and various British institutions and politicians. However, I can’t seem to find any mention of the useful idiots who, in the name of climate change, supported this particular PR exercise/vanity project back in 2007:

The Libyan government has announced the creation of what it claims is “the world’s first sustainable region”. It’s backed by architects Foster and Partners, enthusiastically endorsed by Sir Nicholas Stern – and directed by the Colonel’s son, Saif al-Islam Gaddafi.

The Green Mountain Conservation and Development Authority (GMCDA) will cover the northeastern region of Jabal al Akhdar (literally, ‘Green Mountain’). This encompasses several of the country’s major cities, including Benghazi, and stretches from the coast inland to a plateau featuring junipers, cypresses and wild olives. According to Norman Foster, it’s “one of the most beautiful and little known landscapes on earth”…

Sir Nicholas Stern… has given his blessing: “If we are to avoid the catastrophic effects of climate change… we need urgently to build new economic and social models of development on a substantial scale. The GMCDA will show how environmental and cultural objectives can help to build a thriving and sustainable local economy in a crucial part of the world.” Among other organisations involved are UNESCO, WWF and the Prince of Wales School of Traditional Arts.

The locals didn’t seem to share the enthusiasm of Lords Stern and Foster and the Prince of Wales for Saif Gaddafi’s vision. Green Mountain and Benghazi were among the first areas to revolt.

The BBC’s Michael Hirst was at the press conference at which Saif’s eco-utopia was unveiled. It’s a shame he didn’t remind his colleagues on Newsnight about it before their recent report; I can’t be alone in wondering how much money Foster and Partners received for their work on young Gaddafi’s project, or what financial return Lord Stern and others got for their endorsement. (Yes, I know – the BBC avoids asking the blessed Lord Stern awkward questions, especially concerning his lucrative career as one of the world’s foremost climate change alarmists.)

One final point relating to people who have in the past sucked up to the Gaddafis – who else remembers the edition of Have Your Say from the Oxford Union in which the BBC’s David Eades made a total tart of himself?
UPDATE. Thanks to John Horne Tooke for pointing out that David Eades continues to make a tart of himself, most recently at a “Sustainability Day” sponsored by Italian energy giant Enel last month – see here and here.

From Michael Buerk’s intro to the Moral Maze this week (via Bishop Hill):

“not long ago, to question multiculturalism… risked being branded racist and pushed into the loathesome corner with paedophiles and climate change deniers”

Is Buerk really comparing climate change “deniers” with paedophiles, or is this observation from Saul Jacka in the comments at Bishop Hill closer to the mark?

With respect, isn’t Michael Buerk something of a controversialist?
In other words, isn’t he quite capable of implying what he doesn’t mean to have a dig at some of his bien-pensant BBC colleagues?
On past form, he is certainly capable of taking such a line

Michael Buerk is not himself equating anthropogenic climate change deniers and those who question the doctrine and policy of state multiculturalism with paedophiles: he is lampooning those of his BBC colleagues who do so habitually.

I’m sure my fellow blogger Robin Horbury will have one or two things to say about this article by Fiona Fox at the BBC College of Journalism website, but in the meantime savour the comments underneath. Marvellous stuff. (H/t Umbongo)

A reader sent me the following picture taken by his daughter. As part of some sort of school/youth project she has been transferring the results of a climate questionnaire onto computer. Being a big fan of Top Gear she was amused to see the following answers from a Year 10 boy (click to enlarge): 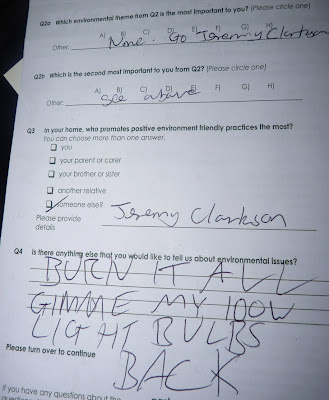 This morning’s Today programme devoted substantial time to allegations – scandalous if true – that the Metropolitan Police has undertaken an orchestrated campaign to discredit expert defence witnesses in Shaken Baby court cases. One of the pathologists in question stated:

A supposedly impartial and highly influential state body using dubious methods to discredit those who dare to disagree with the establishment’s consensus opinion. Remind you of anything? (Clue – Paul Nurse’s Horizon and Storyville’s Meet the Climate Sceptics.)

As some of you have already pointed out in the comments, the BBC is broadcasting another documentary about climate sceptics on Monday. This film (once again made by a true believer and funded by the licence fee) will be broadcast under the banner of BBC 4’s Storyville. I’ve found a promo, presumably for its theatrical release (a couple of right-on documentary film festivals and a green conference would be my guess). Try not to laugh during the opening narration:

“This is a story about the world of climate scepticism and my journey as I put aside my environmental beliefs, rid myself of any bias, and try to really understand why some people think that our carbon dioxide emissions are not a problem.”

It looks like a cross between Michael Moore’s style of carefully spliced hit-piece propaganda (complete with gun-toting rednecks) and some sub-Louis Theroux faux empathy (“Was I becoming one of them?” Oh come on now, you’re not kidding anybody with that bullshit.)

Can you imagine the BBC funding a film by a climate sceptic in which the likes of George Monbiot and various BBC environment journalists are challenged about all the contradictory nonsense they’ve produced over the years?

If “Meet the Climate Sceptics” is as tendentious as last week’s Horizon effort on the same subject (and the evidence of this promo suggests it could be) it may be fair to assume that our state broadcaster has now decided that its role is not merely to uphold climate alarmist orthodoxy but to use whatever means possible to attack those who dare oppose “the consensus”.

I’m sure I’m not alone in finding that somewhat sinister.

(Then again, perhaps film-maker Rupert Murray really does end up on the sceptical side. I’m willing to bet 500,000 Czech carbon allowances that’s not the case, though.)

No single organisation in Britain outside the BBC can set out to challenge the drift of culture, and appear to do so successfully. The Sundance Institute survives by means of donations from sponsors and donors such as the Ford Foundation and George Soros’s Open Institute, with a budget of $25m a year. Within the next 10 years it aims to extend its reach globally. Isn’t it time for our own Sundance?

I guess we won’t be seeing an expanded version of this film on the BBC, then:

Quite apart from offering an unwelcome challenge – in BBC terms – to “the drift of culture” it would upset Mr Redford, and that would never do if Nick Fraser wants to continue visiting Park City, Utah, every year.

(Updated – this shorter version is the one I meant to post.)

It was amusing to see that the most viewed item on the Independent’s website yesterday was the article “Snowfalls are now just a thing of the past” from 2000.

Similar claims have been made by the BBC, of course. In February 2007 the BBC World Service’s One Planet devoted an episode to warmer winters. Here’s the presenter, BBC science correspondent Richard Hollingham, giving us his conclusion :

Richard Hollingham: Those of us who grew up with very cold winters, who tell our children that winter’s not what it used to be, we’re right aren’t we?

Hollingham: Sitting here at the BBC, leafing through my old photos, I can’t help feeling nostalgic for proper winters. This year we had just one day of snow in southern Britain. Mind you it still brought the roads, railways and airports to a standstill and shut the schools, but as most people in London, Moscow, Washington, Beijing or Oslo will testify, a cold crisp winter’s day with snow on the ground is infinitely preferable to the mild damp miserable winters many of us are having to get used to. It seems the winters of our youth are unlikely to return.

And here’s the BBC’s ‘Ethical Man’ Justin Rowlatt writing on the Newsnight blog in January 2007:

Do you remember snow? It’s that cold wet stuff you used to trudge through in the olden days.
I was reminded of the stuff – not by the weather of course – but as I looked through some super-8 footage of my family that my dad shot. It’s been collecting dust at my parent’s house for years. I dug it out because we were looking for images to use in the Ethical Man series.
I built the snowman with my sisters in January 1968. The shots of us sledging are from January 1971. It is beginning to look like my kids will be lucky to ever build a snowman in our garden.

Or how about this on the BBC Weather website from 2004:

There haven’t been to [sic] many cold winters recently in the UK and the number of days with snow cover are becoming fewer too. It’s getting harder and harder to make a snowman in Southern England! Many young children living here are still waiting to see their first white Christmas. If global warming predictions from the Met Office’s Hadley Centre are correct they may never live to see it.

Oh, won’t somebody please think of the children?

Snow – a thing of the past. Just imagine, if the powers that be had believed all this there might be chaos right now.

[Previously – BBC reports the demise of the ski industry.]

Left-wing website Think Progress has a very upbeat happy-clappy take on the outcome of the Cancun climate conference. I am aware of this because BBC LA correspondent Peter Bowes recommended the article after he’d seen it tagged by one of the leading climate analysts of our generation:

How much is all this going to cost UK citizens? What could we spend the money on instead? What will it mean for our taxes, and for the price of energy and goods? How many old people will die because they can’t afford the increased fuel bills? None of those questions worry BBC journalists. No, what matters is that Leonardo DiCaprio says it’s great news.