Articles appearing on BBC News online about the Herman Cain [R] sexual harassment claims in the 5 days after the story first broke on Politico:

Articles appearing on BBC News online about the John Edwards [D] love child in the 5 days after the story was first reported:

Articles appearing on BBC News online about the Anthony Weiner [D] pervy Twitter pic in the first 5 days after the story was first reported: 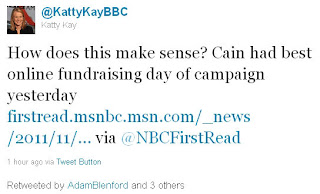 I’m not sure if anyone else was listening to the Today programme this morning but there was a remarkably cheap little attack on GOP Presidential potential candidate, Herman Cain around 7.23am. For some reason it’s not referenced in the running order so I cannot link it for you but it consisted of a short introduction to Mr Cain who was quickly described as “facing sexual harassment charges” (Were he a Democrat I assume these would be seen as a sign of his humanity if not greatness – see under Clinton) before they played a 1991 ad of him singing an Ad for his Pizza company. Cain must unhinge the BBC hive mindset – here is a man who speaks of himself plainly as a black American, who has proven his commercial astuteness, and who speaks to unashamedly conservative values. It seems that not all black Presidential candidates are equal through the BBC prism and the patronising tripe served up this morning may yet come back to haunt them should Herman Cain #occupy the White House