Back in May the BBC reported the following:

A cartoonist whose work inspired an internet campaign inviting people to draw images of the Prophet Muhammad has apologised for her role in the row.

Writing on her blog, Molly Norris said her satirical cartoon was “hijacked” and that the campaign was “offensive to Muslims”…

Molly Norris drew a cartoon in April to protest against the decision by a US television channel to cancel an episode of the popular show South Park because of a contentious depiction of the Prophet Muhammad.

Sadly, apologising doesn’t appear to have done her much good.

You may have noticed that Molly Norris’ comic is not in the paper this week. That’s because there is no more Molly.

The gifted artist is alive and well, thankfully. But on the insistence of top security specialists at the FBI, she is, as they put it, “going ghost”: moving, changing her name, and essentially wiping away her identity. She will no longer be publishing cartoons in our paper or in City Arts magazine, where she has been a regular contributor. She is, in effect, being put into a witness-protection program—except, as she notes, without the government picking up the tab. It’s all because of the appalling fatwa issued against her this summer, following her infamous “Everybody Draw Mohammed Day” cartoon.

It will be interesting to see if the BBC follows up its earlier story and, if it does so, how it will frame this latest horrible news in the context of “increasing Islamophobia”.

(And will the luvvies write a letter of protest about it to The Guardian, or will they be as silent as they were when South Park was censored? James Lileks has some thoughts on how the “smart set” will probably react.)

In the prime post 8am news slot, Today ran an item on the famine that afflicts the African nation of Niger.
Mike Thomson explained the woes that the inhabitants of this country face with first drought and then flood causing endless misery. However I was struck by the fact that Mike mentioned, in passing, that despite being the poorest country in the world it has a booming population. Howe odd. He didn’t mention that fact that Islam has gained a firm grip on this land. I wonder why? Does he think that this has no impact on Niger? If so, he is deluding himself and misleading listeners.

Just when you think the world can’t get any madder, or crueller…

A Saudi judge is reported to have asked hospitals if it is possible to cut the spinal cord of the man, found guilty of paralysing another man in a fight.
http://www.bbc.co.uk/news/world-middle-east-11045848

We’ve been waiting days now for the BBC to report this story – another instance of commenters here and elsewhere on the internet breaking stories long before the BBC!

NotaSheep also spotted the low-key, late-on-parade BBC article, which for the most part is a straightforward factual account. He draws our attention though to the “incredible” final paragraph :

‘Correspondents say the case highlights attempts by Saudi Arabia to balance
religious traditions with a push to modernise the country.’
http://notasheepmaybeagoat.blogspot.com/2010/08/bbc-and-how-they-report-on-hated-israel.html

I bet you never thought of it that way! I suspect you were thinking something more like ‘How barbaric!’ or ‘How disgusting!’

What goes on in the minds of BBC ‘correspondents’?

I wonder if the BBC’s coverage of the Ground Zero mosque (coming soon from Kiera Feldman) will include an interview with Greg Gutfeld about his plans to promote dialogue and outreach next door?

Remarkable interview here on Today on the topic of “Little Birmingham” in Pakistan and the killing of two British couple over an “arranged marriage”. Humphyrs is outraged at the killing but openly expresses approval \at the idea of at least some arranged marriages. Labour MP Khalid Mahmoud is on hand to sanitise the entire arranged marriage issue. Why can the BBC not ask why it is that Islam practises such barbarity? Why do “British” families marry their children off in Pakistan?

I was reading this item by the charming BBC ace correspondent Orla Guerin. It seeks to inform us about the real threat facing Pakistan – poverty. In particular, it concentrates on the decision by a Pakistani father to poison his family to death. Ine survives – this is her story. Why do I think Orla is missing the ultimate tragedy? 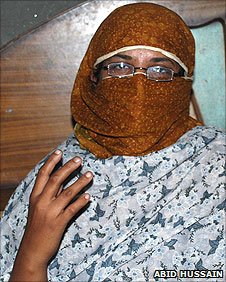 …that the UK’s tweet-happy left-wing comedy establishment (see BBC and Channel 4 listings for details) appears to have opted for a Twitter silence on the subject of South Park’s censorship?

Update. From The Simpsons episode broadcast in America last night: 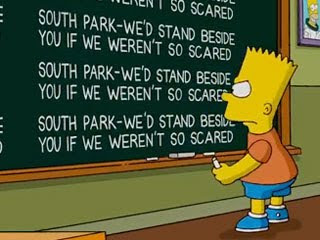 Poor old Bishop Venner – he has come running to the BBC to say that he is sorry if anyone has taken offence at his suggestion that the Taliban could be admired. Using the normal political formulation for something that looks like an apology but actually isn’t, he digs the hole deeper by adding…

” It was one small phrase in quite a long interview, and a phrase that simply said you cannot describe everybody under one heading as Taliban as being equally black, equally evil,” he said. “These are human beings and there are some amongst them who could – we don’t know – who could perhaps be people with whom at the end of the day we could do business. “

Moral equivocation is very much at the heart of the BBC agenda and so it must be a dream for them that this clerical clown comes out and praises Jihadists for their devotion to Islam.

“It does seem to me to raise questions, too, about judgement and tone. Judgement as to whether it is appropriate to make such very serious allegations in this way, and although the Tories say that if they hadn’t raised it in this way the issue wouldn’t have been dealt with and the government wouldn’t have acted, I’m sure there will also be people who will argue that well, actually, perhaps it’s better to make such sensitive claims in private through the usual channels.”

So here we have a BBC journalist wondering if it’s even appropriate to discuss openly the “sensitive” issue of Islamic fundamentalism.

The families of the dead at Fort Hood know where that sort of thinking can lead.

Questions were being asked in Texas this weekend about the friendship between the US Army psychiatrist Nidal Malik Hasan, who killed 13 people in a shooting spree at the Fort Hood military base last Thursday, and a young man called Duane Reasoner Jnr. Interviewed by the BBC on Friday, Reasoner said he felt no pity for Hasan’s victims because “they were troops who were going to Afghanistan and Iraq to kill Muslims”.

A tape of the interview, conducted by Gavin Lee of the BBC, has ended up on YouTube and other sites and is getting an angry response from Americans still shocked by Hasan’s deadly rampage.

The clip I posted is currently ranking 2 in Most Discussed (Today) – News and Politics on YouTube. A group of terrorist-supporting Islamic supremacist whackjobs who were featured by CNN on Friday have also put the clip on their website (no link for those arseholes). Needless to say, they’re very proud of young Duane.

And I’d like to give a shout out (as President Obama might say) to Artists Against Wind Farms who linked to this post yesterday. Their noble endeavour is to stop our countryside being blighted by those monstrosities.

Oh yeah, there’s some more F-bombgate news in the Daily Mail today (scroll down – even I’m bored with the whole thing now and therefore can’t be bothered to give it a blog post of its own.)

This is a Some Updates Update. BBC North America editor Mark Mardell’s eagerness to dismiss an ideological motive for the Fort Hood killings looks ever more foolish: