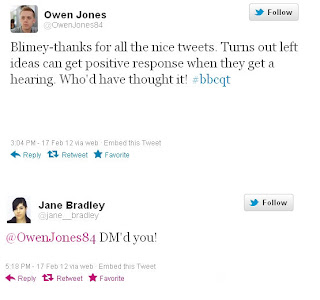 What do you suppose she said?

“You were awesome. We love you in the newsroom.” 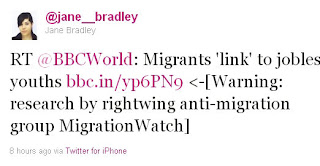 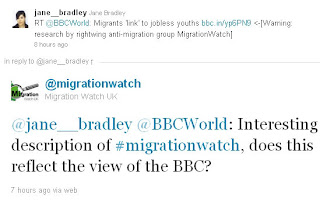 Except BBC journalists don’t issue warnings on Twitter about left-leaning lobbyists, do they? I shouldn’t have to point this out, but as it’s increasingly clear that Ms Bradley lacks basic common sense and can’t keep her politics to herself, I feel I have to spell it out for her in terms even she might understand. Impartial BBC. “Warning… rightwing.” Duh!

This tweet about Migration Watch once again sheds light on conventional opinion within BBC newsrooms. If there are people out there who really think that the BBC’s impartiality guidelines safeguard its journalism against the political views of its overwhelmingly left-wing staff then, well, they’re even bigger idiots than Jane Bradley clearly is.

Is the UK’s NUJ developing its own more radical version of the now-disbanded left-leaning JournoList group from the US?

Thanks to BBC London journalist Jane Bradley (first seen on Biased BBC a couple of weeks ago) my attention was drawn to an event called Reclaim The Media which took place last night. Fresh from interviewing St Paul’s protesters for her employer, Jane asked yesterday if any of her colleagues would be attending the NUJ-backed meeting:

The link in that tweet goes to a website called Right To Work (“Save jobs. Stop the cuts. Defend public services.”) but the speaker list advertised there was a bit out of date. The actual line-up – apart from Pilger – included BBC NUJ rep Becky Branford, the NUJ’s “anarchist” president Donnacha Delong, and Gary McFarlane, Socialist Workers Party activist (and not, sadly, Gary McFarlane the Christian relationship counsellor sacked by Relate for refusing to give sex advice to gay couples. Now that would’ve been an amusing mix-up.)

Unfortunately for Jane, as with the Trafalgar Square demo a couple of weeks ago, she didn’t make it herself. But hey, she wanted to go and that’s good enough for radical cred at the BBC.

What did she miss? Well, according to one student journalist (not BBC – yet) who attended there was an exhilarating political vibe to the evening:

The same student said that they were getting a list together:

I wonder how many BBC journalists will sign up.