On David Vance’s “That General Assembly” post from yesterday, DB posted a comment (his reply to mine at the top of the thread) about how a well-known clothing company, Men’s Wearhouse (an off-the-rack suit chain) spoke out in support of the Occupiers.  The dopey bearded CEO decided to have a store in Oakland put a sign of solidarity in the window. 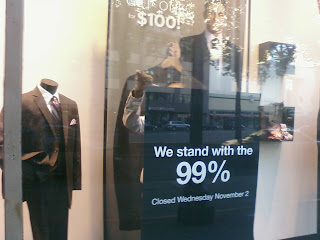 The message apparently went over the Occupiers’ pointy little unwashed heads, so they smashed it. 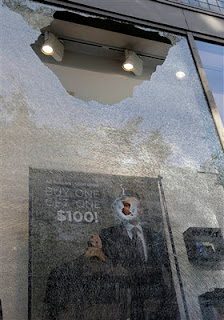 So, do Katty Kay and Laura Trevalyan and the rest of the comrades working for the BBC in the US still think these people want to sit down with their opponents and work out how to fix the system?  Can we admit what’s going on yet?

At last, a slideshow of my photos from Zuccotti Park.  I went down there on Sunday, and spent a couple hours among the Occupiers. I spoke to a lot of people, asking questions, debating a bit, and trying to figure out where they were at with all of this. And oh, my, did I learn a lot.

This post is just photos with my comments, based on my conversations with them.  I walked all around the perimeter of the park (it’s not that big, really, just 33,000 sq ft), and spent a lot of time walking around inside the encampment, visiting the various tables and people sitting with their own signs.  The photos are in the order in which I came across them.  I censored nothing, and believe I’ve covered the full spectrum of activists and causes therein. Video and a full report will follow soon.

Hosted by EyeTube – My thanks to ASE.

BBC Views Online informs us that: One in 20 Hispanics ‘goes hungry’:

Five per cent of Hispanics in the US regularly go hungry and as many as 20% do not have sufficient access to nutritious food, a US report says.

Poverty and lack of awareness about state entitlements are the causes, says the study by Hispanic civil rights group the National Council of La Raza.

Hmmm, do we think that, possibly, maybe, the “Hispanic civil rights group the National Council of La Raza”, might just have the teensiest of agendas? Wouldn’t it be good to be told the origins of these claims up front, in the first paragraph, the one in bold, instead of the official sounding ‘a US report’ says?

Really! That’s shocking. Do you think they’d have realised that before they became immigrants? While we’re at it, compare and contrast this BBC concern for the welfare of Hispanic immigrants to the US with the BBC’s concern for British immigrants to Spain, as spotted by my colleague Laban the other day:

“It would be helpful if they could integrate a little more – why can’t they learn the language? It’s just lazy, isn’t it? Why don’t they bother to integrate more?”

To be fair to the BBC and their unvarnished reporting of this typically tedious ‘A report says…’style space-filler, I have heard that things are so bad in the US that large numbers of Hispanics apparently run, jump and swim across the border with Mexico every day. Oh no, wait, can someone remind me which way they’re heading?