Quick one off the wrist

Watching the latest video from the excellent Evan Coyne Maloney (“Rise and Fall of ObamaMarketing“), in which he contrasts the goofy support for Obama on inauguration day with the subsequent dramatic fall-off in sales for Obama merchandise, reminded me of a couple of BBC correspondents who were very keen to display their own celebratory items following The One’s election: 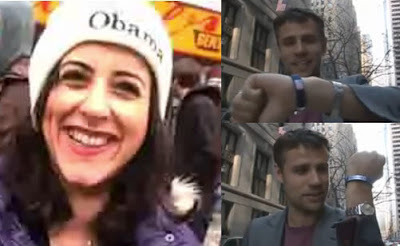 That’s Anita Anand in the Obama hat and Richard Bacon admiring his new Obama wrist band. (Bacon: “Even though I’m technically impartial I’m now allowed to wear one of these”. Love that “technically”.) And before anybody asks, I have no idea whether or not Mr Bacon wears his dainty fashion accessory while vigorously enjoying himself to Obama’s speeches.

8 Responses to Quick one off the wrist