Conservative Home has a new site dedicated to following the activities of the Left. I have a feeling that the BBC is going to afford them rich pickings. Time was when B-BBC was practically the only site that bothered to turn over the stones in the superficially attractive BBC garden to uncover very active little leftist bugs- an endeavour which produced stories like this, for instance

Today, Tim Montgomery notes that “At 0853am this morning the Today programme interviewed Katherine Rake of the Family and Parenting Institute. She used her three minute twenty second slot to attack the Tory idea that marriage should be recognised by the tax system. She avoided a question about the evidence that shows marriage is much more stable than cohabitation and continued her political talking points.”

A little googling shows that her organisation, the innocent sounding “Family and Parent Institute, is 80%+ directly Government funded (the rest apparently from “contracts” with Govt), she was a regular contributor to the Guardian- described by them as “Feminism’s calm champion”- and the chairman of her organisation’s board is Fiona Millar, who of course is partner of You Know Who.

From the Biased-BBC perspective, one wonders if this lady with her impeccable leftist credentials was introduced as a “left-wing commentator”?

The Beeb loves quangos: there are whole swathes of ‘experts’ connected to Government, yet “independent” and best of all from the Guardianista class from which the BBC draws its own recruits. Thus contacts galore are guaranteed, programmes are filled with like minds and cosy insights from Government circles fall like confetti amidst the happy couplings of statist thinkers.

The Polar Bear Song Wednesday, 23:20 on BBC Two (Wales only)

Tom Rugg, a biology teacher from Chepstow, has written The Polar Bear Song to raise awareness of climate change among children. In an exclusive video diary for the Green Wales season, follow Tom to Hudson Bay in Canada to meet Polar Bears International and ask questions on climate change from his pupils. The organisation will use the song to raise awareness of the impact of global warming in the Arctic. See how the sea ice is decreasing and the bears go hungry. Can a song help to save the bears?

Warning – you may feel the urge to jab a sharp instrument repeatedly into your ears. A bucket may be handy too.

This is part of the BBC’s Green Wales season, the promo video for which states: “Every day Wales is waking up to news of climate change…” It certainly is if it’s got the BBC on in the morning.

Apparently the Welsh are much more susceptible to this stuff than the rest of us.

In other Green Wales news: Expert calls for a ‘greener’ Hajj

It’s my view that the BBC most naturally aligns with the Lib-Dem’s political axis these days. So when Nick Clegg pops up Today to announce his Party’s “radical” tax reform, he is given an easy ride. I listened to the interview with Naughtie and there were a few gems in it. Clegg got to claim that “if we are to defeat climate change” without any comeback. He also was allowed to waffle on about the ludicrous “Mansion Tax” – with Naughtie helpfully echoing this piece of class war verbiage – without any serious economic analysis being brought to bear – other than that Saint Vince had evidently got this wrong first time round. Clegg was also able to attack the Conservatives by contorting their plans and all without interruption from Naughtie. I believe the BBC relates to the pathetic wealth de-distribution envy that drives the Lib-Dems and perhaps that is why Clegg and Cable get such an easy ride. Thoughts?

You could not make this up. But it’s true. A colleague at Cambridge sent me last night a link to the Futerra communications agency. It’s a swish outfit with offices in London and New York. Set up with the help of taxpayers’ money, it runs courses for a legion of big corporations (BT, Unilever), NGOs (Greenpeace, the Carbon Trust)) government departments (DEFRA, DFID), and it teaches them “how to communicate” (spread propaganda) about “Climate Change” and “Sustainability”. In other words, they are eco-freaks. Their messages include:

Guess who their other clients include? Of course, the BBC. This is what the Futerra website says about our “impartial” £3.5bn-a-year public service broadcaster:

Various BBC teams have enjoyed training sessions on communicating sustainable development. Participants have ranged from producers for EastEnders to researchers on the CBeebies channel. We also developed the creative PR strategy for the launch of the BBC’s online ethical fashion magazine Thread.

The BBC courses were not specifically about “climate change” as such, but one look at the site shows that these people are fanatical about forcing change on the world by Orwellian propaganda, with “climate change” as the fulcrum. Its core message is “revolution“, under which it says its main aims are:

And the BBC spends our money sending its staff there. No wonder no-one treats Climategate seriously, they’ve all been brainwashed. To the boys and girls at the BBC, those who deny climate change are “irritating”. Full stop.

For the full gory details, you can download their brainwashing manual here. No doubt a copy is kept in every BBC desk.

How very dare the Swiss confound media expectation and vote to ban the building of minarets! I caught the BBC news earlier this evening and the BBC reporter was quick to point out the hypocrisy of the Swiss for allowing Christian churches to stand whilst forcing Islamists to worship in private homes. It clearly escapes the BBC that Switzerland is a Christian country with a rich Christian heritage and has a perfect right to prevent creeping Islamisation. The BBC are’t happy about this.

Yet another anti-Palin tweet from Richard Bacon today to add to the ones I highlighted on Friday. 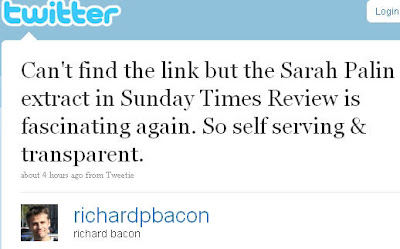 So self-serving and transparent of Bacon in his continuing attempt to prove himself to his media luvvie peers, more like.

Update 20.30. I don’t know if the Twitterer who goes by the name of blackbarbie_ is real or not, but I quite like her. (If she’s not the genuine article I think she could be Rod Liddle taking the piss.)

Last week she told Marcus Brigstocke that she liked Fox News, which drew this condescending response: Earlier today she asked Richard Bacon why he doesn’t like Sarah Palin. How does a PC, liberal, white, allegedly impartial BBC presenter respond to such a question from a conservative black woman? No answer yet, but stay tuned.

Is the release of one thousand Palestinian prisoners in exchange for one young Israeli soldier kidnapped in 2006 a good deal?
Under the circumstances, and in the long run, maybe. Superficially though, one would have thought it looked a leedle, – how you say? – disproportionate. Never mind. We’ll soon be hearing the outcry about that from the BBC. Or not.

So the imminent swap – Gilad Shalit for Marwan Barghouti and nine hundred and ninety nine others– is good news. We want Shalit to be safe more than we mind returning one thousand criminals who are hell-bent on harming Israel.

The World This Weekend (hat tip Craig) featured a rather splendid profile of Barghouti, straight out of the school of journalism that regards certain terrorist atrocities as audacious, and euphamises certain terrorists as militants. So, to establish some weird sort of moral equivalence, three of Barghouti’s admirers were brought in to sing his praises; Ghada Karmi from the University of Exeter with its Saudi-funded Islamic studies dept., BBC’s useful Arabist Alistair Crooke, and Richard Burden M.P. Britain-Palestine all-Party group. Oh yes, and for balance, Devorah Chen chief prosecutor in Barghouti’s trial.

I forgot to mention that Barghouti was convicted of murdering several Israelis. –But that’s a mere detail of no consequence; in fact it’s quite an asset.

The man’s a hero, clean, honest and a patriot, some say he’s a bit like Nelson Mandela, and an ideal replacement for Mahmoud Abbas. He might unify quarreling Palestinian factions.
All Hamas wants is a little stake in power, yet it is treated as a pariah says Ms. Karmi. How fair is that? Poor Hamas. A pariah.

Brought to you by Brian Hanrahanrahan of the Britain-Palestine let’s all have a party Broadcasting Corporation.

Remember back in 2001 when the then Director-General of the BBC, Greg Dyke, described the corporation as being “hideously white”? Well, it still seems to suffer from that characteristic with Radio 4 now seeking to address criticisms that it it “too white”. Evidently the race hustlers get listened to by the BBC – an organisation which already seems massively unrepresentative of the UK population in terms of the ethnicity of presenters and material.

Managers at the station are preparing to introduce a range of measures to address the lack of black and Asian listeners. These include commissioning more material with a distinctly ethnic angle, such as a documentary on patois that will be broadcast next month.

The “climate scientists” implicated in Climategate clearly think of Black as one of their own. When the fair article “Whatever Happened to Global Warming” (written by Paul Hudson, weatherman with a First in Geophysics and Planetary Physics) appeared on the BBC website, the Team were not amused. Here’s Michael Mann in one of the emails:

“extremely disappointing to see something like this appear on BBC. its particularly odd, since climate is usually Richard Black’s beat at BBC (and he does a great job). from what I can tell, this guy was formerly a weather person at the Met Office.
We may do something about this on RealClimate, but meanwhile it might be appropriate for the Met Office to have a say about this, I might ask Richard Black what’s up here?

And in another post, Will S suggests that a FoI request is put in to the BBC to see what email exchanges there have been between Black, Harrabin et al and the CRU unit. An intersting idea. The Mann email clearly suggests much closer links than is normal between journalists and their sources – (to me) it sounds as though he knows Black will do his bidding. Is this the smoking gun showing that the BBC is in bed with the whole climate change scam?

Maybe he’ll have to move into that massive “solar-powered” motorhome he’s got parked outside.

Update. Is it a leak, or was his roof hacked by Russians? Either way, I hope it didn’t cause him to miss an appearance by his favourite politician on the Andrew Marr Show today.

Update 2. Rod Liddle has some thoughts on Brigstocke in his Sunday Times column today. Hat tip to George R, who has posted the relevant segment in the comments.