A celebratory tip of the Red Sox cap to David Preiser for pointing out this rather fine commenter’s fisk of Gavin Hewitt’s latest blog.

It’s a bit rich of Hewitt to now pass comment on the Europeans who “had fallen for Obama” when his own presidential campaign diary read like a romantic novel. Even I was inspired at the time, offering this as a suggestion for a book cover: 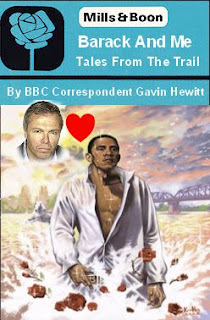 Unfortunately it didn’t get past the BBC moderators.

15 Responses to Hewitt on Obama