I’m sorry to keep making posts about this, but this time the BBC has really gone too far in their deceitfulness.

On the fifth day of such protests, opponents of the Republican state Governor, Scott Walker, outnumbered supporters of the bill.

The bill introduced in the Wisconsin congress would cut sharply the wages and benefits of public sector workers, and curtail collective bargaining.

Saturday’s rallies were peaceful despite angry chants on both sides.

“Sharply cut the wages and benefits” is union talking points. Same use of emotional, partisan language, just different choice of words than last time. But that’s not the worst part. Notice the “angry chants” were “on both sides”.

This is where the BBC disgusts me. Their Narrative about the Tea Party movement, as I’ve been reminding everyone for the last few days focused on the “anger”. There was never a raised Beeboid eyebrow at the anger of anti-Bush protests, and until now there hasn’t been a single mention about the anger of these union supporters. Until now, since they can pin blame equally on either side, thus mitigating any damage done to the Left.

But that’s still not even the worst part. This is:

Anti-Walker protester Jim Schneider, 69, waved a sign with “Hosni Mubarak?” written next to a picture of the governor, who has refused to negotiate with the unions.

Now, you might be thinking to yourself, “Hey, Dave, this is actually progress. The BBC is finally reporting on this kind of stuff when the Left does it. Not sure I agree with you here.” But then you’ll read this:

“The Egyptians have been a great example to us,” the retired teacher said. “What happens here is going to be very important to what happens in a lot of other states, just like the thing that happened in Egypt had an effect on a lot of other countries in the Middle East.”

The BBC even provides space to support this kind of behavior. They agree with the sentiment, of course. I’d like to point out, however, that for some reason the BBC decided to censor the image of the actual poster. I don’t know if it’s either of these two (Craig posted the one on the right in a comment to my last Wisconsin post), but I suspect it’s the one on the left: 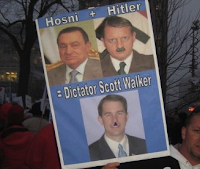 In which case the BBC forgot to tell you that this guy is calling Walker a dictator. I’m sure that doesn’t help the Narrative that these area all good people, “workers”, salt of the earth, on the side of the angels. And if you missed which side you’re supposed to support, they make sure to mention that the governor “has refused to negotiate with the unions”.

And that’s it. Nothing else from the BBC about any signage or angry rhetoric. No mention of Hitler signs or union supporters comparing Governor Walker with Nazis. Instead, the BBC tries to play it as the anger being equal from both sides.

Not only that, but notice also how the only speaker for the Tea Party group was “Joe the Plumber” (for whom the BBC made sure to spell out his real name, a reminder of the moment when the BBC and Leftoid media tried to smear him as being a fake), but no mention at all of Herman Cain. Cain is an actual pundit and has a very large following. His name is even tossed around in discussions of 2012.

Why censor the news about Mr. Cain, BBC? Is it ’cause he is black?

There’s one more bit of information about these protests that’s been censored by the BBC: apparently a few alleged physicians (some actually med students) are handing out fake sick notes so the protesters can get off work. One of them even gave a sick note to Andrew Breitbart. Needless to say, this is a violation of federal law. But the BBC will keep quiet. Just like they’re keeping shtum about the fact that their beloved Obamessiah has sent His minions (Organizing for America) to help rouse the rabbles.

Don’t trust the BBC on US issues.