What with all the noise about the US President selling Israel down the river due to a combination of naiveté, wrong-headedness, and a soupçon of anti-Israel sentiment, but apparently still not doing enough to please Hamas and Kim Ghattas, I missed out remembering that May 20 is the 1st anniversary of Everybody Draw Mohammed Day. Yes, I realize it’s officially over in the UK as I write this, but when I started there was still five minutes to go US EST. So there. The BBC is going to censor all of it because they bow to unjust demands of Islam on these things. Mark Thompson himself said that Islam gets special treatment.

I’m recognizing the day not out of any malice towards Islam itself, as I personally bear none (I’m aware that I’m in the minority here, but this blog is actually a pretty big tent). I do this in defense of individual religious freedom, something that is as relevant in the US as it is in Britain, even though my country doesn’t have an official state religion (If anyone tells me that Christianity is the official religion of the US, they’ll need to tell me which version before I start laughing).

The reason I say this is about individual religious freedom and not malice towards Islam is because I take the position that non-Muslims are not required to obey the rules of Mohammed. Why do I bother? Because of the continued pressure to avoid saying anything that offends Muslims. Except the real concern isn’t as obvious as having the freedom to burn a Koran (which is an act of malice towards the religion), but rather the freedom to do things that Muslims wouldn’t do without being told to stop because it’s offensive to their sensibilities. The vast majority of media outlets in the UK and US censored even the most innocent cartoons out of appeasement and fear. Freedom of speech was thus taken away from non-Muslims, who instead were forced to obey the law of a religion not their own.

I’m talking about things like preventing non-Muslims from having a plastic pig included with their childrens’ farm toy set, because pork is verboten in Islam. More food companies are shifting their products into halal compliance, in the US and in the UK, in spite of many non-Muslims’ objections to that particular method of butchering. It’s being forced on non-Muslim children by the school system as well. No option for both choices: only the Mohammedan option on offer, period. Then there’s telling non-Muslims they can’t eat in front of Muslims during Ramadan. Nobody’s going to ban eating a sandwich in any public sector workplace during Passover in order to avoid offending Jews who don’t eat leavened bread during that time, so there is a clear unjust double standard which cannot withstand the scrutiny of the laws of freemen. Nobody should be forced to obey the rules of a religion not their own, or even their own if they don’t want to.

Yes, the above examples are mostly a couple years old or more, but where’s the evidence that this no longer happens anywhere, all cases are solved and will never happen again?

I fully support offering halal or kosher or Klingon dietary options in an area where that’s what the majority wants, if it’s a commercial decision. If KFC or Domino’s want to have halal-only food in Mohammedan neighborhoods because that’s where the money is, it’s perfectly fine by me. But nobody should be forced by the government to obey the rules of another religion.

It’s in the spirit of continued religious freedom that I mark this first anniversary of Everybody Draw Mohammed Day. Muslims are forbidden from making graven images of people, most especially Mohammed, but non-Muslims can do whatever the hell they like in a free country. That is not an attack on Islam, but a defense of freedom against any form of fascism or oppression.

My contribution is below. Everyone is encouraged to add their own contribution or links to others. It’s not an attack on Islam, but rather a statement of individual freedom. Mohammedans are as free to make fun of me as celebrated artists are for such brave acts as dipping a crucifix in urine or producing a play featuring Jesus as a homosexual. I don’t care. Freedom, baby. Censorship is against the best interests of a free society. 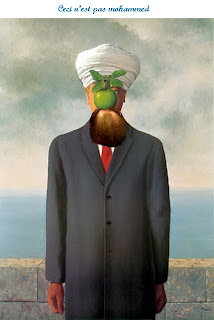