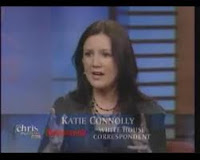 Regular readers of this blog will know that David Preiser, DB and myself (in the comments) have had our purely metaphorical cross hairs trained on Katie Connolly – the lead reporter at BBC Online’s Washington bureau – for quite some time now.

She was headhunted from Newsweek in the Spring of 2010 to head a new team that (we discovered) also included an enthusiastic Obama 2008 campaigner called Matt Danzico (remember ‘Llamas Heart Obama’?). We noticed that the new online unit began pumping out a lot of heavily-biased reports, generally favouring Democrat positions and undermining Republican ones. Katie Connolly was responsible for quite a few of those articles.

The unit seems to have gone oddly quiet in recent weeks and it now transpires that Katie Connolly has a new job. According to her updated strap line on Twitter she is now a Senior Project Director at the Benenson Strategy Group. They are usually described as Democratic Party pollsters but also help devise campaign strategies for a large number of Democrat politicians and trades unions, playing a major role in the 2008 Obama Campaign and even helping Gordon Brown during the 2010 UK general election. (That went well, didn’t it?) .

So a BBC reporter we’ve long suspected of being biased towards the Democrats leaves to join a firm of Democrat Party strategists.

Who’d have thunk it?

18 Responses to WELL THERE’S A SURPRISE!