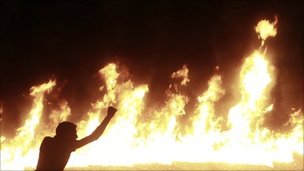 It’s come as a shock to the BBC that things are not working out the way they assumed they would in Egypt. The Arab Spring looks more and more like the Islamic uprising some of us pointed out at the time. Obviously Christianity cannot co-exist with the rampant intolerance of Islam and Egypt’s Coptic Christians know all about this, having been at the receiving end of things. So, they take to the streets to protest and that raises issues for the BBC. You see some street protest is good, but not all. This morning, I heard the BBC refer to the conflict as being between Coptic Christians and “Conservative Islamists”! Then, when it came to the street fighting in “Freedom Square” we were informed that “Conservative elements” in the Army were responsible. So, in a neat euphemistic move, Radical Islam and at a totalitarian military are erased from the crime scene whilst Conservative is moved up to the frontline. Jeremy Al Bowen was on hand to provide his famous impartial reporting on the issue so we can rest assured that the picture painted by the BBC is everything we might expect.