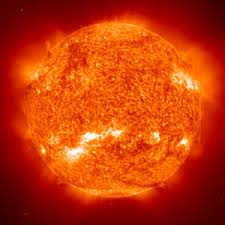 Had to laugh at this item (7.17am) on Today this morning.  It suggest the RADICAL news that the big orange thing in the sky – the Sun – might actually affect weather on the Earth. I know, I know, who would have figured that one, huh? Anyway, our dear friend Richard Black was on hand to quickly point out that whilst the Sun may help us predict UK winters, this has no effect in any way on the very real danger of …Man Made Global Warming. (Actually, he’s right in one way, since AGW doesn’t exist, nothing can have an impact on it!) It was the speed of his comment that was entertaining, he was clearly determined that no one out there might have a second or two to conclude that it is the Sun, that vast body at the heart of our Solar System, that is the major determinant of our planet’s weather. And that might unravel the hysterical but lucrative fantasy of AGW.

8 Responses to THERE’S ALWAYS THE SUN…