Yesterday, As I See It posted a comment in the open thread about how Lyse Doucet gave a report on Radio 5 in which she gently sanitized the Muslim Brotherhood ( I can’t find a link to it right now, but if someone points to it I’ll add it here).  At one point, she apparently slipped up and said that Salafists are “extremists….er…..let me say strict….”  Oops, nearly tanked the Narrative there.  In any case, I was reminded of a post I saw by Jeremy Bowen back in February, where he said that the Muslim Brotherhood are “conservative, moderate and non-violent”.

WTF? I said to myself.  How can  they be both?  By definition one cannot be the other.  Any group calling for Shariah Law cannot be moderate. Yet Bowen saw no problem saying it.  However, somebody had a problem with it, as he stealth-edited it out quickly.  I failed to take a screenshot at the time, assuming News Sniffer would catch it if anything happened, but when I went back the next day, “moderate” had been removed, and News Sniffer had nothing.  So I gave up on it.

Fortunately,  I’ve just remembered the Wayback Machine.  Within a minute, I found this: 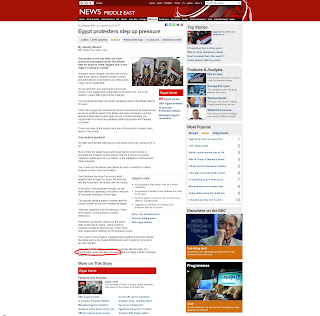 Why would he say such a thing?  Somebody pointed it out to him, and he or an astute BBC News Online sub-editor sent it down the memory hole.  Wake me up when a Beeboid says the same thing about the Tea Party movement.

If anyone still had a modicum of trust in Bowen’s reporting, it’s surely shredded to pieces now.  He’s obviously partisan, and not thinking clearly.  Defenders of the indefensible may dismiss this simply because it’s 10 months old, but I fail to see how that makes any difference.  Bowen truly believed it, and clearly meant to sanitize the Muslim Brotherhood so the license fee payers wouldn’t get too worried about them.  He’s not, so why should you be?  I’m sure his superiors at the BBC know all about what he really thinks, and simply don’t care.  Some of them may even agree with him. It’s irresponsible, not to mention delusional.  I’d say it’s impossible to trust his reporting on Egypt any longer.