By Their Tweets Shall Ye Know Them: The Tweets

Following on my post explaining the situation, here are the tweets. Some will be screenshots or some other form of publishing because the actual tweets have been deleted after the BBC staff member responsible was caught. With one exception, there are no retweets here, as that’s a separate debate. A comprehensive research project if far beyond my means, but just scanning through so many of them tells me that for many BBC employees, this is just the tip of the iceberg. Note the trends on certain issues.

Because some people seem to keep missing the point, let me repeat: This is not meant to prove that all tweets are biased, nor is it meant to prove that all BBC staff are 100% of the Left. Many BBC employees are fairly responsible with Twitter, and do not tweet their political opinions at all. This is meant to prove that those who do freely tweet their personal political and ideological opinions are nearly all of the Left. Nearly every department of the BBC is represented here, both on air talent and editors and producers behind the scenes. This also demonstrates that in many cases the line between official and personal accounts has been blurred so much as to be essentially non-existent, contrary to BBC guidelines. The whole thing needs to be trashed and re-examined.

This is mostly all thanks to the keen eye of DB, without whose vigilance this would not have been possible. I just kept a list as the sheer volume of them began to reveal certain patterns, before starting to search the feeds myself. Other contributors are: Craig, Reed, Jeff W, Guest Who, Laban, Notasheep, BBC Waste, David Vance, ChrisH, and yours truly. (Apologies if I missed anyone.)

KAYE Adams, the BBC broadcaster, has been accused of being unfit to present a top current affairs programmes after she tweeted that Boris Johnson “should p*** off back to boarding school”.

The former presenter of Loose Women, the ITV talk show, who presents a popular Radio Scotland show, was on holiday in Tuscany when she made a series of expletive-filled Tweets about London’s mayor. She has now apologised and deleted the comments from her Twitter site.

Wow – Obama could look like Nelson Mandela by the time this is over. @bbcnewsus #election2012. businessinsider.com/bloomberg-busi… via @bi_politics

Also, when reporting from the Republican National Convention, Adams made 10 tweets, all negative, and for only one day, Aug. 30. From the Democrat’s convention, he made 30 tweets over three days, Sept. 4-6, all positive, including the #DNC2012 hashtag. The RNC hashtag was absent from all of his tweets.

In case anyone isn’t sure who Anand is, a charming photo of her can be seen here. The other person in that photo is the star of his own R5 Live show, Richard Bacon.

Did you just see Obama’s speech. My God, had there been a better political orator in own time? Last 6 or so mins were remarkable I thought. — richard bacon (@richardpbacon) September 10, 2009

Here’s a screenshot of Bacon telling his followers to check out a vicious anti-Palin article by her personal womb inspector, Andrew Sullivan.

@bbcfreespeech you bet I’m interested in who is US President! I just hope to God it’s Obama – as the alternative is untenable. — wendy bailey (@wendybaileypr) November 6, 2012

@politicalyeti *Wonder* if the Tories are sending out information to staff about sexual harassment procedures at the moment, like the BBC — Ros Ball (@Rosball) October 17, 2012

Today, BBC Sports Personality of the Year has been brought to you by the letter P, for patriarchy t.co/wQFl3xU3 — Ros Ball (@Rosball) November 29, 2011

@adamlambert well said that man – and she could be your next President? And we thought WE had troubles in the UK – it’s bloody utopia.

The “gift” is the video hosted on the BBC website of that Iraqi reporter throwing a shoe at George Bush.

He’s talking about the Newsnight report on the inauguration speech which the BBC edited to make the President sound more Green-friendly.

I love the guy but #polishdeathcamps is a bad Obama gaffe especially as scripted not off the cuff on.wsj.com/LdwygC — Claire Bolderson (@ClaireBolderson) May 30, 2012

Peter Bowes, BBC correspondent in the US

Cannot believe Chomsky, Pilger, Assange are speaking in Trafalgar Sq and I’m too sodding hungover to go. From my sofa, I urge you all to GO. — Jane Bradley (@jane__bradley) October 8, 2011

Watching it as an adult, pretty sure Pocahontas isn’t actually a love story but a warning against capitalism & imperialism. Disney style. 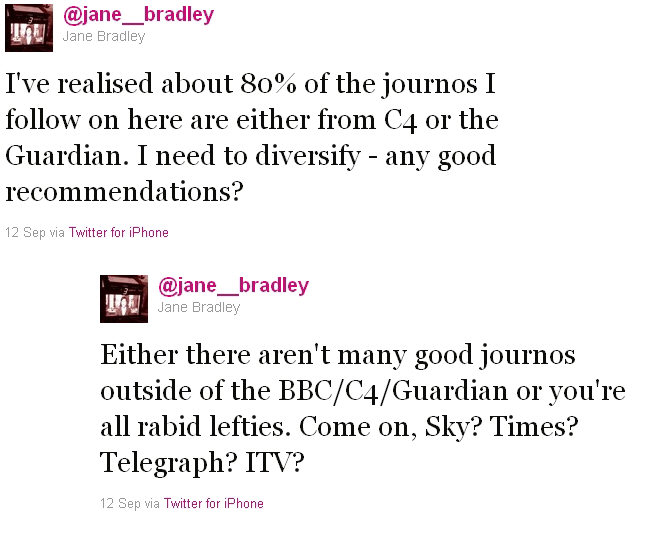 Am reading an essay on American capitalism and it’s effect on women. 50% jealous of academia. 50% glad to be out of it…

Dear America. Your president is cool, witty and classy. Everyone likes you more when he’s in charge. Love, The Rest of The World — Mario Cacciottolo (@SOTMario) November 7, 2012

Shut up going on about how great Manchester is George Osborne. We know it is and flattery will not buy our votes. Now kindly fuck off.

Katie Connolly, ex-BBC US correspondent. From Newsweek to the BBC, now works at a Democrat strategy group, worked on the campaign to re-elect the President. Go figure. Lots of tweets, too much to post here, but Craig’s list and full analysis can be read here. Highlights:

She regularly corresponded with a number of JournoListas, and RTed their groupthink as often as possible.

Matt Danzico, BBC News reporter in the US, and former Obama campaigner. His Twitter page has both the disclaimer and the BBC logo wallpaper

Doing some cold calling in Bushwick to get that vote out mister. — Matt Danzico (@mattdanzico) November 4, 2008

(UPDATE: Forgot to mention this last one is from before Danzico worked for the BBC. This was from back when he was working for the 2008 campaign. Usually people go work for a political party or campaign after a stint at the BBC. I included this to demonstrate both his consistency and as an example of what is not an obstacle to being hired as an impartial journalist.)   Several more can be seen here. Tom Donkin, journalist for BBC News Online Magazine

Whatever his faults or criticisms – #Obama is the coolest president there is youtube.com/watch?v=Zip9l2… — Tom (@TomDonkin1) April 25, 2012

Ryan is risky VP choice for Romney. Republicans now so extreme, his main appeal 4 swing voters was record as a moderate. Ryan anything but. — Stephanie Flanders (@BBCStephanie) August 11, 2012

Could the GOP now define itself in its reaction to healthcare reform in a way it might regret later this year. Remember Tories = Nasty Party — Matt Frei (@mattfrei) March 22, 2010 Jim Hawkins, BBC Radio Shropshire (One of many presenters who uses his “unofficial, personal” account as the official one for a BBC show)

So we’re spending very slightly more on foreign aid than we are on the police. And … ? Some people seem annoyed by this — Jim Hawkins (@jimallthetime) October 17, 2012

Here’s what his avatar was until DB posted it last week and somebody told Hughes to clean up his act. 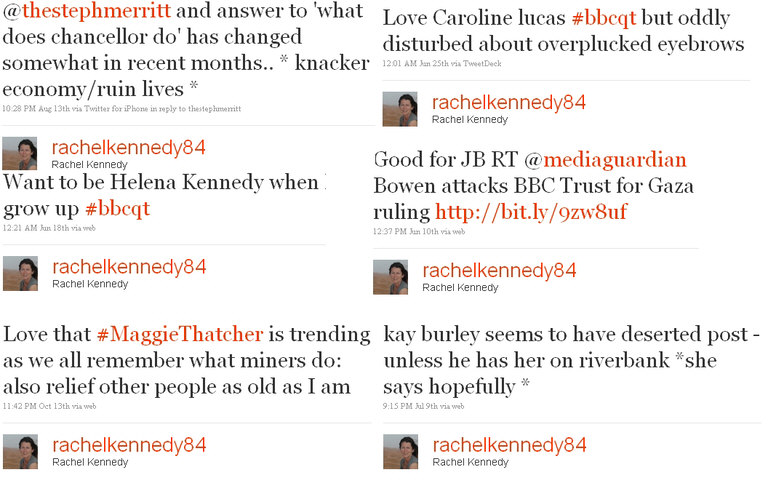 Screenshot because Kennedy deleted the tweets after Guido Fawkes linked to DB’s post on them and it gained wider attention. Same goes for this one:

RT@ismh Just gave my kids a kiss as they sleep. Thanks to healthcare reform I can afford to insure them both not just the one without cancer — Dominic Laurie (@dominic_laurie) November 7, 2012

Big event this week is attempt by Palestinians to get enhanced observer status at UN Gen Ass on Thursday. Another log on the fire. — Dominic Laurie (@dominic_laurie) November 26, 2012

“Would Prince William write to FIFA on behalf of the Scotland team wearing poppies? No. Cos he thinks ENGLAND won the war.” This message was quickly followed by; “I’d love to slide a samurai sword up Prince William’s arse to the hilt, then yank it towards me like a door that won’t f@*king open.” This was eventually followed by another anti-Royal family message: “Absolutely f@*k England and its royal wee family living it up while pensioners freeze to death.”

This is the only Retweet in this collection, included here as evidence of the groupthink regarding Sarah Palin, and particularly the blood libel so many BBC journalists and other staff tried to push. Even one of the BBC’s experts in social media felt free to retweet such a thing. Now for an original tweet:

So Cameron doesn’t know what Magna Carta means. What would Andrew Mitchell (allegedly) say about that? — Sue Llewellyn (@suellewellyn) September 27, 2012 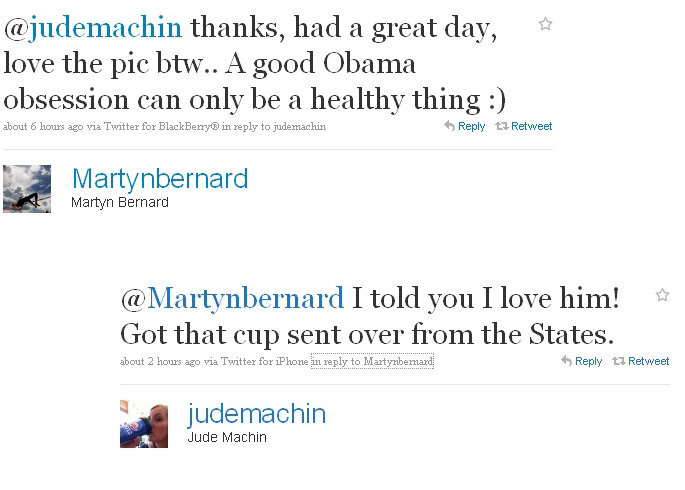 @leahgooding I am not very impartial when it comes to US politics! x — Jude Machin (@judemachin) October 6, 2012 That the BBC is leftwing is one of the biggest myths in British public life. Only helps Murdoch in the end.

@warrenellis @greg_palast @pennyred sorry I missed it – on air, dammit!

Shame Time doesn’t have the same influence any more, because this needs to be said. Again and again. ti.me/jk3EOU

@jamesfallows just on BBC World News America – he is my hero — Claudia Milne (@claudmilne) May 2, 2012

Romney pledges to repeal the “death” (estate) tax, which only the wealthiest pay // Who can blame him for looking out for his children??

Romney’s record: Got rich, lured corporate sponsors for the ’02 Olympics, signed an individual mandate, ran for president. Anything else?

Always hoped he’d run for NYC mayor, to see him take on a sanitation strike MT @mattyglesias: Clinton as WH Press Sec’y would be amazing

Locog should have Romneyshambles on the payroll. He’s united the nation behind the olympics at last. All hail Mr Leader.

Usual suspects lined up against the tobin tax: Hannah, Hoban, Carswell and “spare us a penny” city traders. Suggests it could be popular.

Save the Children says British mothers can’t afford to work because of childcare costs. M/while, we can afford a tax break for the rich.

Why have few musicians got involved in Wall Street demos – has something happened to the great history of American protest? #freespeechCLE

@kentishtownie Perhaps I’m just surrounded by it and yet so underwhelmed by it…also, I despise Newt. Sound of his voice = red mist o rage.

Regarding one of the Republican presidential candidate debates:

@nhickey So it seems at times…sigh. I certainly feel less intelligent having watched this freak show for over a hour already… — Joan Soley (@JoanSoley) June 14, 2011

Brett Spencer, Radio 5 Live Interactive editor Screenshot because he deleted the tweets after being caught. 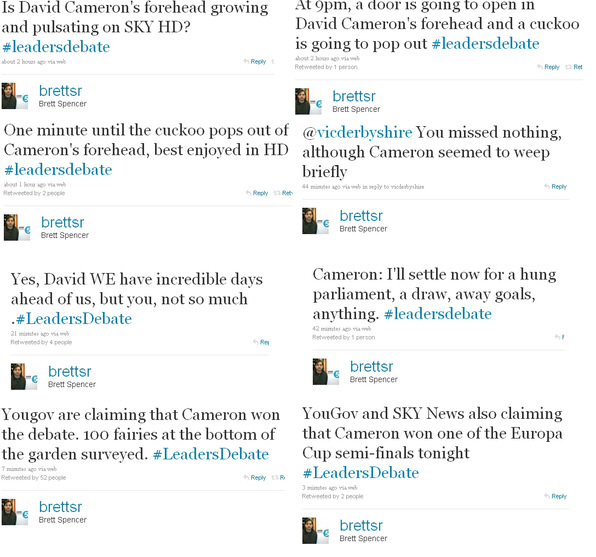 Can’t believe the PM has got positive front-pages out of his back of match-box energy pre-announcement… Reckon he won’t believe it either — Allegra Stratton (@BBCAllegra) October 17, 2012

Jeremy Vine, Radio 2 host, Eggheads presenter, former Newsnight journalist (and another one who uses his “personal” account as the official one for his BBC show)

WATCH. Eleven seconds in, did Mitt Romney use a magician’s sleight of hand to produce notes, which are banned? democraticunderground.com/1251119479 — Jeremy Vine (@theJeremyVine) October 6, 2012

All you need to know about News Gingrich, in one simple cartoon (Doonesbury) bit.ly/wteWpr — Tim Weber (@tim_weber) January 9, 2012

US government to make profit from bailouts, Treasury says bbc.in/HK0sf2 Not that Romney or any other Republican will note — Tim Weber (@tim_weber) April 16, 2012 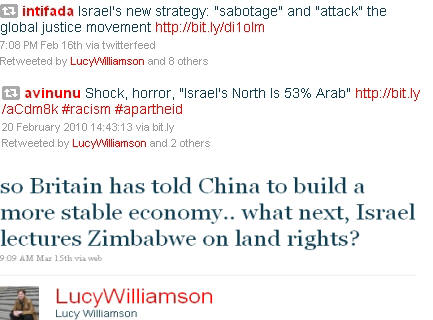 And there you have it. Come see the bias inherent in the system. I’ve actually lost count of how many tweets there are and how many Beeboids are represented. Someone else will have to do it now since my eyes are all bleary from laying this out.

For balance, here’s one which appears to be from the Right by James Landale, BBC News political correspondent (h/t Jim Dandy)

Oh, and apparently Andrew Neil is on the Right, and Nick Robinson used to be in his youth. Balanced or what?

89 Responses to By Their Tweets Shall Ye Know Them: The Tweets