I hope everyone enjoys this brief segment on Today with Evan Davis. He discusses the new report from the Social Market Foundation which is highly critical of the Department of Work and Pension’s Work Programme to get the long-term unemployed back to work.

Now, normally I’d say that any organization which has “Social” anything in its title is Left-leaning. I’d also generally say that any organization which states that they are not in favor of free markets but rather open markets under the guiding hand of government (a step away from fascist corporatism) is Left-leaning. But they have George Osborne and a couple of other non-Leftoids on their board and as associates, so they get away with the “independent” label and I can’t complain that Davis should have described the foundation as Left-leaning when he introduced its director.

(Yes, I know the clip I’ve linked starts just after Davis mentions the Foundation, but I’ve listened to the full programme and there was no qualifier of any kind.)

I can complain that there was something else missing from Davis’ introduction of the group, something that calls into question his very presence at the mic on this topic: Evan Davis is one of the board members of the Social Market Foundation. 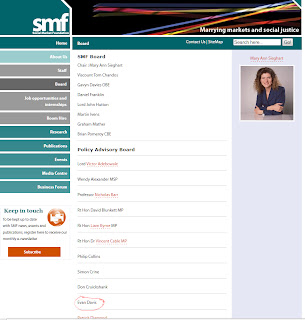 Davis has even co-written a pamphlet for the organization about the pros and cons of gay marriage. Yet no mention at all that of any association with the group, never mind that he’s now on the board.

So the Social Market Foundation criticizes a scheme by the Conservative-Led Coalition, and one of their board members uses his position at the BBC not only to bring it up but to actually question the Government Minister in charge. The director of the SMF gets his say first, but then isn’t involved in any debate with Grayling. Only Davis challenges the Government, without mentioning his conflict of interest. And no challenge at all to the SMF director’s statement. His challenging questions to Grayling come off as advocacy for the SMF position.

At the very least, the Today producers should have made Davis recuse himself and had Justin Webb take the SMF’s side against the Government.

Following the account of procedures attached to the production of The Big Questions, and exposure of the tactics used to ensure car-crash telly (so as not to bore the audience) here’s another example of the tampering that goes into making a programme aimed, above all else, at ratings.

I know the strictest parents series has an agenda. It’s set up to show that delinquents need boot-camp parenting. This theory has as many holes as a sieve, but that’s not my point. It is that most programmes start with a conclusion, whereupon much film is shot, most of it is discarded, and the rest is edited to fit.

I saw an episode that featured strict black Christian parents unconvincingly performing ‘wonders’ on two rebellious British teenagers. We’ve all seen black Americans going crazy in church before, so this lot didn’t seem particularly surprising, but neither ‘parents’ nor teenagers came out of it too well.

The series in question is shown on BBC3 so I don’t expect many people watch it, but the Orthodox Jewish episode was bound to ruffle a few sensitive feathers as it made the strict parents look as bonkers and unreasonable, if not more so, than the naughty teenagers.

A plague on both their houses, one might conclude. I certainly wouldn’t recommend participating in exploitative rubbish like that. But for another inside story see this JC article and the comment from neighbour Chani.

“Over 100 hours of film was shot that week, including many examples of the neighbors delivering dinner, partying around a lag b’omer bonfire, loaning the teens clothing from the “Clothing Gemach”, strolling with the teens around the neighborhood, and throwing them a good-by party where they showered the teens with personal blessings. None of these clips made it in. What did make it, unfortunately, was a line that Tzippy was “fed” by the director regarding “the community authorities.” Taken out of context, it leaves an incorrect and imbalanced representation of a community that smothers and rejects, but does not embrace and accept”

It’s not this stupid series that worries me. I fear that everything we see on the BBC is, to one degree or another, similarly manipulated. With their access to the media, programme makers and producers are in a uniquely powerful position, and in any other profession exploiting naïve people would be regarded as a form of abuse.

Anyone catch Andrew Marr this morning and if so, is it contagious? More seriously, I heard him interview Conservative wee Georgie Osborne and then NuLabour leader in waiting Alan Johnson aka Postman Pat. I felt there was a visceral difference in the tone and attitude adopted by Marr during these interviews. With Osborne it was aggressive and challenging, but with Johnson it was conciliatory and agreeing. It’s as if the Conservatives are in government and Labour are in opposition given the way Marr went after Osborne. However, in a year’s time, that will be the case and THEN the BBC attacks will really kick is. Anyone who thinks that BBC will give Cameron and his pals an easy ride once they hold the license-fee purse strings need to think again. We will have a sustained attack on every move made by the new government and Marr and his ilk are only warming up.

The BBC is a firmly ideological organisation. One way you can see that is that the messages they purvey rarely change, even though they may evolve somewhat.

Take the Iranian election this week. The BBC’s John Simpson said when Ahmedinejad was elected in 2005 that Iranian politics was “complex and sophisticated”. The invitation to consider his election as an expression of an intelligent electoral system was clear.

Now, following the latest election in which Mahmood strengthened his position with suspicious symbolic perfection outlined by Amir Taheri here, Simpson describes Iran as “a relatively sophisticated country”. Relative to what he does not say. As I did before, in 2005, I invite you to discover some examples of this “sophistication”, all of which documented by Amnesty International (for which I hold no uncritical admiration) since Mr Simpson voiced his view of Iranian “sophistication” in 2005.

Simpson, now apparently ensconced in Iran as he used to ensconce himself in Iraq when he befriended Saddam’s ministers, makes the case for stability:

“it certainly is not in the outside world’s interest to have a long period of disorder in Iran. Political chaos in a leading oil-producing country would do more economic damage to Western countries.”

In so doing he makes the case for Ahmadinejad’s continuing in office, and breaches the code for impartiality. But that is more or less a stable state with the BBC, isn’t it?

When the BBC claim impartiality, it follows that they claim to be a timeless, apolitical entity reflective of truth. I couldn’t help thinking about that when I looked at the BBC website this morning and saw the lead stories on the World and UK webpages. On the former, France and Italy were being taken to task for falling off the Bono Africa charity bandwagon. On the latter, a young woman accused of child indecency was being paraded before the public eye.

It seems to me this is activist journalism and trial by media. I don’t know why a person simply accused of a crime is pictured, named, aged and specified in this way by our national broadcaster. I do not think it would have happened in the past. As for Bono’s media bonanza, the BBC loves to talk about aid but it is less keen to scrutinize trade, especially of agricultural produce. Protectionism is rife in Europe, and not absent in the US. “Naming and shaming” “guilty” aid reneging countries is in my view just a circus of smug sentiment. How about scrutinising the manifest inefficiencies and incapabilities of our bureaucratic EU in spreading and growing wealth?

Grimer has drawn our attention on the general thread to the inadequacies of the complaints procedure. The BBC does have one, and complaints are sometimes upheld. If they are, what is the outcome?
When the the horse has bolted – and no one seems to know how to shut the stable door – they say something like:
“Editors were reminded that, when there is an active controversy over an issue, it is important to consider carefully how to reflect varying shades of opinion.”

Continue to perpetuate inaccurate misleading agenda-driven misinformation because that’s all you know, till another complaint is made, we uphold it, ad infinitum? In other words carry on regardless.

Could Bono be the arch-example of the BBC’s corrosive effect on Britain? The BBC recently delighted in U2’s “surprise” little open air concert . Think about how the age profile of the BBC and that of Bono’s boys have so many synergetic properties. Combine that with Coldplay’s and you have a fait accompli. Both gangs of lads coincide wonderfully with the BBC’s ideology- enviro-sappiness and redistributive politics; the air-headedness of Bono and the soft-girlyness of Martin don’t harm the feminist agenda, neither. Little wonder then that for years the BBC has selected them as cultural representatives, preserving them as cultural artefacts even beyond the point where their natural pop-appeal would have waned. Since at least Band Aid and St Bob the BBC have been dabbling like this, or rather controlling like this, and today a little squeak goes up against their cultural hegemon. Overreach? One can but hope. And get a little angrier.

(I should add, I actually quite like(d) all the above-mentioned acts, but they should stand and fall- as once they did- solely on the basis of the freest possible popular vote. Which they certainly no longer do)

Not only but also…

Did you read about Wossy and Russell Brands latest on-air prank? These stars in the BBC firmament thought it would be hilarious to make obscene phone calls to 78-year-old Fawlty Towers actor Andrew Sachs. They left a series of lewd messages on Mr Sachs’s answer phone claiming, in shockingly explicit language, that Brand had had sex with his granddaughter, Georgina. Sachs was left deeply upset by the crude calls – which were also broadcast to about two million listeners to Brand’s Radio 2 show.

In a way, such crudity is all we can expect from the likes of Ross and Brand so quelle surprise but the real killer for me is that senior BBC executives cleared the offensive messages for broadcast, even though making abusive phone calls is a criminal offence. The dysfunctionality of the BBC lies not ONLY in sustained left-wing bias but ALSO in unfettered vulgarity – which they make US pay for. The National Broadcaster is a National disgrace and the fact that parasites like Ross and Brand leach of the huge amounts of cash it can provide care of you and me is an outrage that can only be addressed the day the License tax is axed for good.