The right-on metropolitan media clique knows best but for some reason the general public refuses to acknowledge it. What a shame, eh?

If comments on Twitter are anything to go by, Richard Bacon was an extremely inept and very biased host on last night’s Young Voters’ Question Time. This will come as no surprise to regular readers of this blog who already know that he is simply incapable of being impartial and shouldn’t be covering politics at all, either on BBC TV or radio. One audience member even tweeted that Bacon said openly that he was going to vote “yes” in the AV referendum. Quality impartial BBC journalism, that. 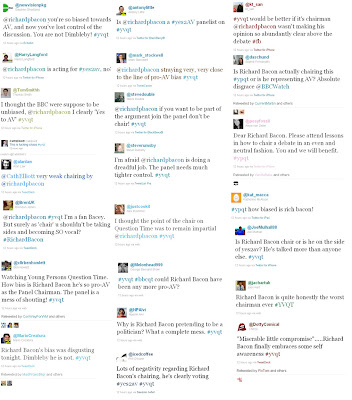 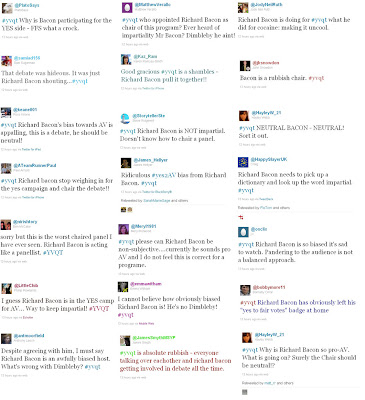 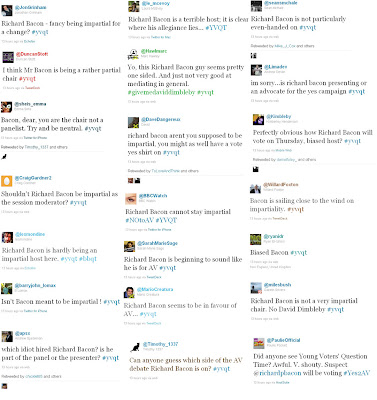 And to counter any feeble suggestions that Bacon doesn’t have a dog in this fight, here’s what a member of the audience tweeted: 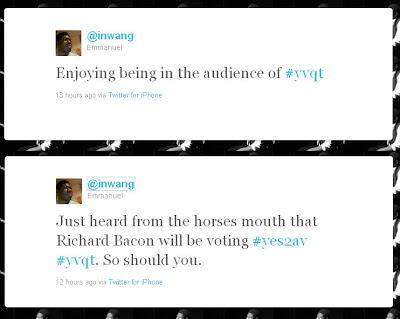 Getting back into the swing of things, I thought I’d monitor the New Channel’s coverage of the AV referendum campaign on Tuesday. On that day at least (I can’t vouch for any of the others), it seemed scrupulously balanced – balanced number of guests, exactly the same length of interview (well three seconds difference!) for the pro- and anti- spokespersonages, appropriate questions to each side, same number of interruptions, and the BBC even kept quoting an opinion poll showing a significant ‘No’ lead. I wasn’t expecting any of that, but it shows the BBC can do it.

Unfortunately, they often fail to do it – as Evan Davis demonstrated this morning.

Here, staged before an audience at the South Bank Centre (who sounded even less representative than a Question Time audience), Evan hosted a debate between Jonathan Bartley of the Yes campaign and Stephen Parkinson of the No campaign. Evan did much more than host it though. He actively joined in the debate, almost entirely on the side of the Yes campaign. It was effectively two against one.

The interruptions flew at Mr Parkinson, often only seconds (one time just a second) after he had begun to speak. So did the questions. All but one of the questions asked/points made by Evan Davis came from a stance opposed to the No campaign. Transcribing Evan Davis’s words should make the extent of the bias clear:

Questions/comments put to Stephen Parkinson (No to AV):

1 Stephen, you’re against AV. Can we just talk about fairness because it seems like..you keep saying the winner under AV loses which means, you know, the system’s unfair but if the winner loses it’s because the majority of voters don’t want that person to win, they want another candidate instead.

4 (interrupting) And some get their first preference counted twice!

7 One issue that has come up is the issue of whether people understand AV. Can I just ask the audience here if you think you understand AV and what it entails? And how many say you don’t understand it, it’s too complicated? So again about 98% of people understand it. That has been a bit of your campaign hasn’t it Stephen, a little bit of scaring people with the complexity of it all?

2 Jonathan, let me put this to you. Does it not encourage the candidate who is the most banal and least offensive to always win and you end up with a government that is sort of the lowest common denominator?

Not very even-handed, is it?