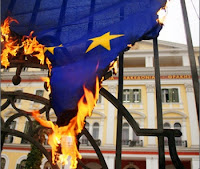 …so how many years makes for a “tradition”? With the BBC; not so many when it suits them.

Downing Street will not fly the EU flag over Number 10 during Europe Day on Monday unlike previous years, the BBC has learned.

The UK’s relationship with Europe is a potential source of tension between the Conservative and Liberal Democrat coalition partners.

Making an uncalled for political point about the whole thing the BBCs own Laura Kuenssberg tweets:

No 10, FCO + Treasury decide not to fly EU flag for Europe day on Monday, but Vince’s BIS dept will! (DECC conviently has no flagpole)

Really? The Coalition must be doomed. Doooomed! The BBC – looking for splits wherever they can… 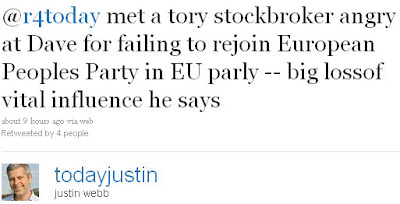 Oh well, that’s it then. Discussion over. Eurosceptics are wrong, clearly. Well done Justin and your Tory stockbroker acquaintance for sorting that one out for us all. Met anybody else on your travels whose views we might find valuable?

Had to laugh at the BBC reporting the news that the German economy has racked up an impressive….0% growth in quarter four 2009. Whoops. This seems to surprise the BBC experts. Just yesterday, the BBC was reporting that Merkel and co were lecturing the Greeks on financial probity and now today one has to enquire as to whether the Germans need to look closer to their own economy before lecturing others. Still, the BBC finds solace in the fact that the French managed 0.6% growth! Way to go. The Eurozone is in serious trouble with the money markets making more informed decisions on it than any simpering pro EU BBC journalist!

On its website the BBC could hardly restrain its glee.

UK Prime Minister Gordon Brown has welcomed the “Yes” vote on the EU’s Lisbon Treaty in the Republic of Ireland referendum.
Mr Brown said the treaty was “good for the UK and good for Europe”.

Accompanied on the websites front page by a picture of a smiling Mr Brown it was if the last few days at Brighton had never existed. But there was also a BBC bonus. Not only had the Irish electorate come to their senses and submitted to the BBC position on the Lisbon Treaty but it spelt out trouble for those divided Tories currently languishing in the polls – and where did the BBC go to for that information? Why, “The Independent”, of course, quoting the helpful findings of a poll of Conservatives activists views of Lisbon conducted by website Conservativehome.

“The findings suggest that the damaging divisions on Europe which destabilised the last Tory government could resurface at the party’s annual conference in Manchester,” the newspaper suggests.

Cue Marr, Crick, Naughty and Robinson – you have your orders….

Bias can take many forms. One the most basic is the use of language; consistently misrepresenting a subject can render coverage totally one-sided. In the case of the Irish referendum on the Lisbon Treaty, which is taking place today, the BBC decided some time ago that the treaty itself was about “simplifying the EU”. Liz McKean on Newsnight last night deployed the phrase at the beginning of her report; and it’s also here, on the BBC website. I’ve heard it used in almost every report about the topic, to the point of it being a mantra. Somebody, somewhere in the ranks of two thousand BBC journalists decided it was the correct description.

But I despise the EU, hate the whole exercise and want out. And to me – and those like me on sites like the excellent EU Referendum – the treaty is anything but “simplification”. That’s what Brussels itself calls it, the propaganda it has rammed it through by using. The reality is that every aspect of Lisbon is a stupifyingly complex, labyrinthine, anything-but-simple, slow motion coup d’etat through which the unelected and undemocratic ruling elite at the Barlaymont is creating further integration in the moves towards a Stalinist superstate. If you doubt me, you can read the document here.

The BBC loves the concept of “simple” because it wants with every sinew to allow the EU to ram through more measures on climate change, and because it will make the sainted Tony Blair the first EU president. What can be more “simplifying” than that?