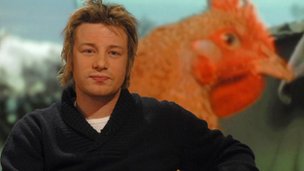 Those swines in the Coalition. How DARE they support  Academies that better meet the needs of local parents and pupils without the dead hand of Government telling them what to do, how to do it, when to do it by and how often to do it! I mean if people get the idea that Education can prosper without the State, where might it all end? Health…god forbid even Broadcasting? So, thank goodness the BBC have picked up on Jamie Oliver’s allegation that Academy schools are endangering the health of pupils by not providing appropriate State designated nutritional needs.  How unlike the veritable gourmet nirvana that is the State system…

PS Couldn’t resist the BBC image used to accompany the story. Suggestions for a caption?

It’s curious how the BBC treats some stories.  Take the one which suggests that lives in Scotland, Wales and Northern Ireland could be saved IF people adopted a more “English diet”. Cue disgruntled Scottish Professor to inform is how superior Scottish diet was and that it was only because of the economic disadvantage in Scotland that prevented “working class” people enjoying a better diet. Later on, I tuned into the Nolan Show on BBC NI, and he was running the idea that it is because of our unemployment and “social deprivation” that caused diets to be poor. There was a suggestion that “the poor” needed perhaps special locations where they could buy cheaper food and fruit – maybe the Government should open supermarkets for those on Welfare? Amazing Statist stuff – and all served up without any dissent.

This concerns one of the most mind-numbing BBC coverage areas of recent times: the fat issue. The BBC just loves an opportunity to wax on about swollen numbers of fatties. The mass of stories are contradictory, tendentious, and depressing. There are stories like this from the deterministic point of view- and stories like this from the social conditioning point of view. All the time the BBC infuriatingly racking their brains about how to rid themselves of the offending fatties, without ever considering that eating and lifestyle need balancing.

And then a completely different sort of story comes along. A heartwarming story (heart-burning story?) of an eater that would have made my Grandmother proud who also happens to be a world-beating athlete. What’s that I hear from the BBC? A chirping of crickets? A blanket of absent coverage?

Isn’t it terrible how today we are exposed to so much idiocy, not least through the BBC, just because of the cult of celebrity?

The response to the post David made about “most disliked” BBC personalities just shows the flip-side to the pursuit of celebrity- which is that many people are sick of their inanity.

This blog is about bias, but there are some intersecting themes. Sometimes a comment is made and reported not because of newsworthiness per se but because of celebrity. How can a journalist be balanced starting from a statement like “Chefs should be fined if they haven’t got ingredients in season on their menu.”? Mussolini, Hitler, would have been proud of such high kitchen standards.

If your ten year old brother said it you’d tell him to shut up, but if Gordon Ramsay said it, and you were a BBC journalist, it’d be “news” (there again, who made G.R. except the BBC-led media establishment?).

Two lines of criticism have been picked up by the BBC, unworkability! and trade for poorer countries, but as Neil Reddin points out, the biggest of all is missing: the freedom argument.

“See what was missing? Of course, there was no mention of consumers making their own choices over where their food comes from. Individual freedom and all that. Hard to believe that the BBC, an organisation funded by a mechanism that gives its consumers no choice, could miss that one *cough*.”

One can’t push back against it all, but Dizzy has a great go at a story which the Independent-echoing BBC report about food waste. It’s probably supposed to make the supposed food crisis more, you know, “interactive”. An absurdly long BBC report misses most of the points which Dizzy raises. The money quote as far as I am concerned occurs almost at the bottom: “WRAP receives government funding from England, Scotland, Wales and Northern Ireland.” (WRAP is the niftily named organisation which carried out the food waste study. Nb- interesting how Gvt funding is pointedly devolved). Good of them to tell those readers who actually consider the matter newsworthy enough to read to the bottom.

Picture the little group hug that all this involves: the Labour Gvt, WRAP, the Indy, and the BBC. On second thoughts don’t- wouldn’t want you to waste your dinner.