So, the Socialist candidate Francois Hollande managed to outpoll Sarkozy in the first round of  the French Presidential race. And aren’t the BBC happy about it? I suggest that the idea of a French President determined to raise upper tax threshold to 75%, increase the number of State Workers whilst raising the minimum wage and thus ignoring the concept of fiscal austerity is their kind of guy. I can only imagine how the BBC will treat this item tomorrow morning on the Today programme! I’m going to be out of the UK for the next few days so will do my best to post here but hope fellow writers can step up whilst I am gone! Au revoir…

“In 2005 political commentator (and DV favourite) Mark Steyn asked this:

‘In five years’ time, how many Jews will be living in France?’

The BBC would like us to believe it is the anti-immigration comments of Sarkozy or Gueant that have stirred up anti-Semitism resulting in these recent attacks….they would have preferred you to believe it was an attack by the Far Right. Events of course failed to follow the narrative.

If you did not already know about anti-Semitism in France a 5 minute session on Google would enlighten you….it is perhaps a shame that the well paid professionals of the BBC do not bother to do a proper investigation and instead fall back on lazy stereotypes and the prejudices of its ill informed ‘journalists’ to provide us with informed comment.

Anti-Semitism is rife in France…some by the Far Right but mostly by immigrant Muslims. Jews are fleeing France for the ‘safer’ haven of Israel.

In 2003 ‘a 23-year-old Paris disc jockey called Sebastien Selam was heading off to work from his parents’ apartment when he was jumped in the parking garage by his Muslim neighbor Adel. Selam’s throat was slit twice, to the point of near-decapitation; his face was ripped off with a fork; and his eyes were gouged out. Adel climbed the stairs of the apartment house dripping blood and yelling, “I have killed my Jew. I will go to heaven.” ‘

This was just one of many vicious attacks on Jews by Muslims.

The BBC has studiously ignored these attacks and who perpetrated them.

The BBC has also ignored the exodus of Jews from Europe as a whole.

In 2010 a Dutch politician urged Jews to ’emigrate to US or Israel’…..

‘Former European Commissioner Frits Bolkestein says there is no future for Orthodox Jews in Holland because of ‘anti-Semitism among Dutchmen of Moroccan descent whose numbers keep growing.”Bolkstein backed up his statement by saying that the increase in anti-Semitic incidents in the Netherlands over the past decade had led him to have limited confidence in the ability of the government to fight anti-Semitism.’

‘….Benzion Evers believes Amsterdam is not a safe place for Jews. The son of the Dutch capital’s chief rabbi says he is planning on leaving the country next year together with his wife and infant son.

“You constantly need to hide, to be careful and to carefully examine which neighborhoods to go into and which not to go into.”

He also told of how recently, he is careful never to leave the house wearing his fur hat and hides his skullcap under a baseball cap when going through neighborhoods with high concentrations of Moroccan and Turkish immigrants. Five of his brothers and sisters have already left Holland, and he already has his bags packed. He estimates that “60% of Amsterdam’s orthodox community intends to emigrate from Holland.”‘
We know that Jews in Sweden are being forced to emigrate to escape violence from the incoming immigrant Muslims.

But to the BBC there is ‘No problem’ with anti-Semitism in France…..

A report on ‘Traumatised French Jews’….
http://www.bbc.co.uk/news/world-europe-17456582
‘No problem’
The media have reported calls by some Israeli politicians for French Jews to emigrate to Israel to escape anti-Semitism in France. But many Jews in Paris disagree. “I think we have to stay in France,” Nicole said. “I’ve never been in Israel and I’m Jewish.” She says she does not feel threatened at all in France. Guy agreed with her. “I love my country, France,” he said. “We have extremists, like everywhere, but France is a beautiful country.” ‘No problem’

A Muslim named Mehdi states….
“There is no problem between people,” he said. “You have to make a difference between extremists, terrorists, who can be from any community, and you should know that most Muslims are not like that.”

So there you go…the BBC tells us that no Jews want to flee from anti-Semitism and that in fact Jews and Muslims get along like long lost brothers….I’m certain the BBC could have found a Jewish person who did want to emigrate if it had tried just a bit harder…than it wanted to.

However ‘Der Spiegel’ paints what is likely the more realistic picture of what is happening in France….

‘Daniel Ben-Simon, a member of the Israeli parliament, the Knesset, examined the phenomenon of Jewish emigration in his book “French Bite.” “Jews in France fear the day when the Muslims become a determining factor in French domestic politics,” Ben-Simon told SPIEGEL ONLINE. “They fear that the country will no longer be safe for them at that point.”

Even today, there are already “hundreds of anti-Semitic incidents” a year, committed mainly by Arab immigrants.

…many Jews in France feel that they are a threatened and increasingly excluded minority. Every year, these feelings prompt thousands to take a dramatic decision, namely, to pack their belongings and move to a crisis zone: Israel. They feel safer there.

Curious what a different view of the world one gets when you don’t have to rely on the BBC for it. 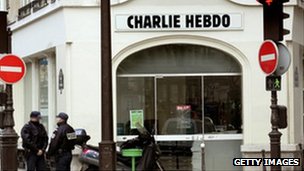 Just a little comparison. A profile of Chirac on the BBC spent half of its time praising him, and the other half being respectful and/or mealy-mouthed. Soft-pedalling corruption; omitting oil-for-food; forgetting the famous quote when Chirac told Poland they missed a good opportunity to remain silent. Very Old Media.

For some fresh air, you have to go elsewhere. To get quotes like this:

And that is surely closer to the truth of French politics, and l’escroc.