OBAMA HAS WON THE US ELECTION!

Yes, I know it has not happened but judging from the tone of the BBC coverage today, it may as well have. I caught Justin Webb (Who else?0 on Today just before 7am declaring that the only factors that can stop The One winning are 1. If his huge army of cultists don’t actually turn out to vote on the day and 2. If Americans are really prepared to vote for a black man. So, the defence is already in from Justin- if America does NOT elect Obama it is because too many Americans are RACIST. Got that? When he was at it, Justin managed his obligatory swipe at Sarah Palin, suggesting that whilst she was the darling of “the base” (aka redneck scum in the sophisticated Justin’s deluded mind) she was a real problem for many other voters (Democrats) There is no doubt that Sarah Palin has induced real irrational hatred from the political left and Justin is a prime example of PDS.

Next up, the polls. The BBC runs an interview with Bob Worcester in which he concludes Obama has a 95.7% chance of winning. The polls have been playing a major part in the Democrat campaign and as has been reported here the intent is to demoralise McCain supporters and imply that the outcome is already predetermined so there is no real point in republican supporters voting . I believe the BBC will play along with this “It’s a landslide” riff as Obamania fever mounts over the next week. The BBC thinks that in just over seven days the end of the wicked Bush regime is in sight and that a socialising appeasing liberal will be elected as President. Nothing will stop it doing everything possible to project this and this week’s Question Time from the States should be a guaranteed Halloween horror show (I won’t be around to blog it).

Justin Webb may be an intelligent person, it’s just that he carefully hides it in his work for the BBC. Today the latest in the BBC’s “elect Obama- The One” coverage features a prominent diary entry from Webb none too subtly entitled “palling with Pinochet”. Reading Webb in recent times I have been struck by the force of his dislike for Sarah Palin. I suspect it comes from his intense atheist’s disdain for her religious background. Anyhow, today Webb borrows Palin’s successful slogan about Obama “palling around with terrorists” and uses it against McCain. Webb has clearly convinced himself that Palin unfairly attacked Obama and he takes it upon himself to hit back. You will notice if you follow Webb’s link to hyper-partisan pro-Democrat Huffington Post that the idea of presenting the alleged McCain link to Pinochet in the same terms as Obama’s proven link to Ayers is not there. It’s Webb’s own little twist. But maybe if Webb thought for a second he would realise the comparison is painfully inapt. McCain allegedly visited Pinochet’s regime once in the 80’s, while he was on the Senate Foreign Affairs committee. It was apparently known to the US Government, and, if disputed documents are to be believed, included one 30 minute meeting with Pinochet, which McCain joked was like meeting the head of the John Birch society.

To put it politely, Webb’s comparison is ridiculous. It is a known fact that Obama has had many meetings with William Ayers, convicted and unrepentant terrorist who believes America to be the world’s leading problem. There is a great rundown of Ayers’ beliefs and actions at Zombie’s blog. Ayers has worked alongside Barack Obama, Obama reviewed favourably an Ayers’ book which itself referred to “writer Barack Obama”, and Obama launched his first election campaign at a fundraiser at Ayers’ home. They lived in the same neighbourhood. Some visitors here will know more than I about this stuff, some less. But I think that Justin Webb either knows less than any of us, or is simply so infatuated he simply must retaliate on Obama’s behalf against those nasty Republicans.

As we approach the end of the US Presidential campaign, Justine Webb becomes ever more outrageous in his shilling for Obama. This time round he manages to firstly quote from the far left blog The Huffington Post (again) and then he digs up a comment from John McCain back in 1999 praising Colin Powell. Apparently the defection of RINO Colin Powell to the Obama camp was ” a psychological blow” Let’s face it – Justin has given up on reporting – he is now collaborating with the Obama campaign in full breach of every BBC guidance. The thing is, the BBC does nor care. It is obsessed with getting The One is the White House and having a socialised USA and so all notion of professional neutrality is out the window. I bet the champagne bottles WILL be popping once again in Broadcasting House should Americans place their faith in the Obamessiah next month. Now in this regard, most of the rest of the UK media is equally pro-Obama, witness Boris Johnson’s witless article in the Telegraph yesterday (seized on the Beeb) but the difference is that I get to choose whether or not I pay out to read or listen to such opinion – the BBC forces me to do so and that is the real point of grievance here. 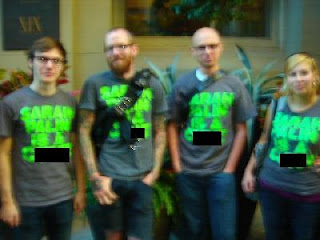 Point one: in your comment about the Right’s remarkable anger against Obama (highlighted by David here) you clearly show you are, as they say, “in the tank” for Obama. It’s easily demonstrable as your accusation precisely reflects what avowedly right-wing journalists like Michelle Malkin say is “another false narrative: The narrative of the McCain “mob” ” that is being developed by the liberal-left media. Your narrative now, Justin. If balance lies in being in the middle of the opposing poles- you aren’t there.

Point two: in case you think you can justify your claims of one-sided partisan anger, there is plentiful evidence available of Leftist hate- look at Malkin’s site here, and at the above thankfully blurred photo of disgraceful hateful activism. What’s spite and anger if that isn’t?

Justin Webb has weighed in on the issue of all those “angry” Republican voters who just won’t do the decent thing and worship The One. As Justin puts it “the fact remains that some Republicans despise Obama in a way few Democrats despise McCain.” Really? And on what basis is this a fact? Justin then spews out the Dem talking point that opponents of Obama have “extreme views.” It’s amazing to see such one-sided reporting from the North American editor of the BBC.

How does BBC headline the story?

Beneath the headline, in boldface type:

“Progress in cutting the number of deaths among children under five is still ‘grossly insufficient’ in some parts of the world, Unicef has warned.” The picture that accompanies it is of two black children, one crying and one looking grim.

The actual news is that things are getting better. But that is not the impression that the headline, the introduction or the picture is designed to give.

I switched from CNN to BBC as a source of online news in response to CNN’s extraordinarily biased reporting of the FLDS case in Texas. BBC is not as bad—you only have to read to the bottom of the article to get the relevant information.

He must be doing it deliberately, surely. Please tell me how this can be defended. It’s Webb, of course – on Palin, of course, who he describes as “the woman rational, educated Americans regard with ever-increasing horror”. What exactly is the point of the editorial guidelines when they’re so clearly ignored by the senior staff? Is there anyone stupid enough to now doubt where Webb would put his vote, and if not how can he possibly be said to be reporting impartially?

It’s probably worth just having a permanent link to Justin Webb’s blog on this site, but even so I found his latest effort surprising:

Credit to the House Republicans: they fight for what they believe in. But John McCain – what does he stand for? Does he back the party rebels or the president – he won’t say. As things stand, he stands for not debating.
I stand to be corrected (as usual) but I cannot believe the American people are sitting back and saying, “Good show, John.”

A quick reminder of those editorial guidelines: Our audiences should not be able to tell from BBC programmes or other BBC output the personal views of our journalists and presenters on [controversial] matters.

Wonder if you caught B-BBC favourite Justin Webb on Newsnight this evening? The topic was the dramatic events in the US with John McCain suspending his campaign – and most likely the pending Presidential debate on Friday – to go to Washington and work to get a solution to the current impasse on the financial bill. Obama has responded by insisting he will carry on campaigning and that he will be there for the debate Friday night. He also cast aspersions on the timing of the Cain statement. Cue Justin who now appears to be part of the Obama campaign. Our man was quick out of the traps to suggest that McCain was doing this for selfish reasons and that Obama was virtually forced to reject the invitation to go along with McCain and deal with the biggest issue confronting the USA. Webb has set the standard for B-BBC most biased commentator of the year. I’m just hoping the Obama folks remember him.

I had high hopes for Justin Webb’s latest blog entry. At last, some decent coverage of Palin’s bounce. The BBC’s audience might be a little surprised to read that such a thing exists, but at least he’s gone to the effort of remedying that, I thought. Which is why I was a bit surprised to find myself reading about the 1953 execution of the Rosenburgs (Soviet-like behaviour, reckons Webb); a plug for a new BBC series on America; coverage of Russell Brand’s reference to Bush as a ‘retard’ (of which a piece by India Knight reckoning he let America off lightly is the best, says Webb); the fact that Webb hasn’t seen the whole of Sara Palin’s ABC interview (as North American editor, why would he?); and then, finally, that it will be tougher for Palin from here on in, although it’s difficult to imagine how it could be from the Beeb’s point of view. It ends with some food for thought for Palin: “Geraldine Ferraro’s bounce lasted two months,” warns Webb gravely in a reference to the first female vice presidential candidate. In fact, that should be just enough time to put McCain in the White House, but I’m guessing that’s not what he meant.

UPDATE: Anyone not already a little wary of the new Radio 4 series on America given Webb’s endorsement (and the BBC’s involvment) should read this by its presenter David Reynolds. “Empire and liberty have been recurrent and often conflicting themes in America’s development and I think they’re also reflected in this year’s rival presidential candidates,” he begins. Guess which candidate “embodies the martial, imperial America”, reminding us “that the United States is a country made by war” and which candidate could “help expunge the original sin of slavery from Jefferson’s empire of liberty”… In fact, from there the article improves (in terms of balance anyway) but still I’m not sure I’ll be tuning in.